Čížov - the last fragment of the Iron Curtain

The village of Čížov is a tiny settlement near Národní park Podyjí, the smallest national park in the Czech Republic, and the only national park in Moravia. The park follows the course of the Dyje – or Thaya – river between the historic town of Vranov nad Dyjí and the city of Znojmo. The area is characterized by an otherwise rolling landscape, which suddenly falls steeply down along the valley of the winding river. Lush – though often very young – forests of oak, beech and other deciduous trees fill this tranquil biome, which covers 63 square kilometers. 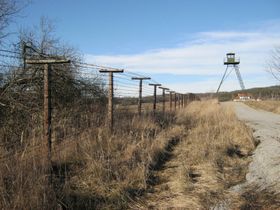 Photo: Dominik Jůn Čížov is situated in the flats above the Dyje valley. It is unique in all of the Czech Republic in that it contains a preserved section of the Iron Curtain fence. Walking out of the valley, one comes across a dead straight asphalt path leading towards this village. Being just 3.5 kilometres from the Austrian border, the path itself is a telltale clue that it was very likely either part of the former inner border fence, or a road used by the military to patrol this so-called “pohraniční pásmo” – or “border zone” – during the communist era.

For citizens of Czechoslovakia, this inner fence was the real Iron Curtain. Usually built at considerable distance from the actual national borders with Western countries, even approaching the fence meant trouble. And even travelling to a region near the border usually meant being questioned by police as to one’s intentions. Crossing over meant either being shot dead by border guards or surrendering and facing a lengthy prison term for treason against the state. Only the most trusted communist functionaries were allowed in this militarised zone. The entire Podyjí national park area was off limits to the public. Its numerous World War II-era concrete bunkers facing Austria were now used for an entirely different purpose; the ruins of the Nový Hrádek castle on the banks of the river Dyje were blocked off with concrete. 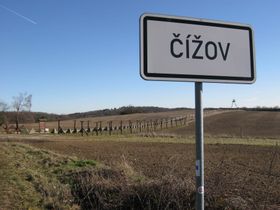 Photo: Dominik Jůn Walking to Čížov, the nature of the straight path is soon confirmed. A tall metal watchtower becomes visible, and then, in the village, a fragment of the fence itself, perhaps 200 metres long. Wooden T-shaped poles, lined with now rusty barbed wire, both horizontally along the fence, and vertically at the top, served to thwart anyone seeking to climb over. Before that is a layer of concrete blocks to prevent any cars ramming through. Border guards (often accompanied by dogs) would patrol such fences in pairs, one walking inside the gap between fences, while the other would walk on the “public” side. These were usually young men, indoctrinated through mandatory military service to be a noble “pohraničík”. The official line was that they were protecting the state against dangerous external enemies. In reality, they were guarding a giant Soviet-occupied prison, and serving a regime desperately trying to prevent its own people from escaping. 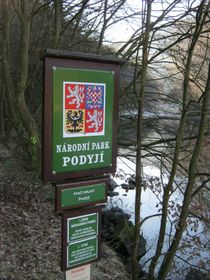 Photo: Dominik Jůn Only a short section here, perhaps 20 metres long, features a somewhat more accurate double fence. Apparently the fortifications utilised in such fences were updated several times between the 1950-80s. After the 1960s, 10,000 volt electrification was out for “humane” reasons. Instead, electronic trip wires were used to detect untoward movement. Increasing paranoia by the authorities often saw such border zones thickened and moved inward away from the border.

So is even the short section of double fence at Čížov a truly accurate representation? Turns out not. There was, quite probably, also a third layer of fence in this 20-metre thick obstacle course. Not to mention additional electrified wires to prevent animals straying into the fence. And likely even a fourth lesser fence on the other side of the asphalt path used by border guards. Also present would have been rows of electrical poles for all the wires needed to keep the entire system running. Add to that all the signs warning people to keep away. 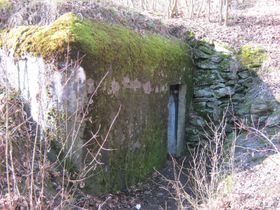 WW II bunker in Podyjí, photo: Dominik Jůn It’s certainly fascinating to visit Čížov and see at least a fragment of this otherwise entirely lost piece of history. But one can’t help but feel a little disappointed that a more expansive and detailed remnant – or reproduction – of the Iron Curtain is not to be found anywhere in the Czech Republic. There are certainly places that would benefit from such a tourist attraction. Western Bohemia, for one. But in other places, too. Indeed, not long ago, I spoke to a lady who helps run the tiny local museum in the southern Bohemian town of České Velenice – which directly neighbours the Austrian town of Gmünd. I asked her whether people here regretted not having preserved some of the truly intricate Iron Curtain defences which existed here, as a tourist draw. “The town could certainly use that,” she nodded enthusiastically, before telling me about ongoing fundraising for another project here to revive an early 20th century trolleybus route. Maybe an EU grant could be sought to rebuild an accurate section of the fence, I then suggested. Maybe one day, somewhere...