The Czech Army's work in Iraq: a view from within

The 6th military police contingent has just returned from Iraq. In this edition of Talking Point, we take an inside look at the work of the contingent, which has focused above all on training and supporting the emerging Iraqi police force. 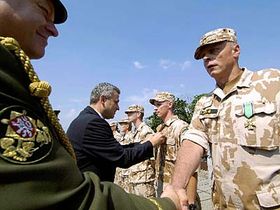 "Distinguished Generals, distinguished soldiers, relatives and friends. I am always particularly happy to be able to welcome back a unit from the Army of the Czech Republic that returns home from a successful mission abroad. Your unit has suffered no casualties and, after working to the best of your abilities, achieved superb results in Iraq. I especially value and appreciate the efforts by our military police in Iraq because I am fully aware that your task is not just to monitor and secure but first and foremost to train and educate."

The primary mission of the contingent members was to participate in providing training and professional expertise to members of a new Iraqi police force. Chief of Staff, General Pavel Stefka:

"The Czech Army has been operating in Iraq since April 2003, starting with a military field hospital. With the help of international support, Iraq is trying to build the basic foundations for a democratic state - a new government, an army, and a police force. But there still are terrorists who oppose this new development. Our contingent witnessed numerous, almost daily, attacks against the policemen they trained or those who tried to join the training programme. But its members achieved a tremendous amount of work, whether at the police academies, police stations, while training the traffic police, as part of the multi-national divisions and of course in the military hospital." 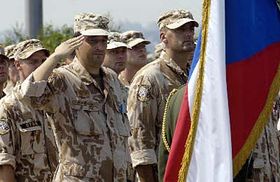 "For the last three months, I have been the commander of the Czech military police contingent in Iraq. We had personnel of around one hundred. Most members of the contingent were military police responsible for training Iraqi police at the police academy at Az Zubayru, and at the British Base at Shaiba in southern Iraq."

What did the training involve?

How did you communicate with them?

"We communicated with the help of translators. Some translators spoke Czech because they had studied here in the Czech Republic some time in the past. A few of them spoke English, and one translator could speak Russian and Serbo-Croat, so we were able to communicate with him too."

This was the sixth contingent in Iraq. How have you integrated with the Iraqis you trained?

"This was my second time there. The Iraqis were very keen to get new information and more knowledge. They were very keen to participate in this training, so we had no difficulty there. But some of them had trouble reading and writing because during the Saddam era, the people in the southern regions that we were deployed to were withheld education. So, the biggest problem was when we had students who were not able to read and write."

"We usually started at 8am and finished at around 3- 4 pm. The working week was different than what we are used to here. We started on Sundays and finished on Thursdays. So, we had Fridays and Saturdays off. More recently, we had Thursdays and Fridays off."

I noticed that there are some women in the contingent...

"We had nine women. Some of them were nurses at the British field hospital, because we had a surgical team there. Others were in logistics or some other field but they really didn't participate in the training because, as you may already know, in the Arab world it is a little bit difficult for a woman to teach a man."

An equally large 7th contingent, was recently deployed to Iraq, where it will serve for the next three months. So far, the Czech military police have a parliamentary mandate to stay in Iraq until the end of the year.

The Czech Army is involved in three other missions abroad. It currently has several dozen soldiers in Afghanistan. Meteorologists and explosives specialists are searching for mines around Kabul's international airport, as well as conducting weather surveys. Czech soldiers are also participating in the ISAF Multinational Force's support of the process of disarmament, demobilisation, reintegration, and the national anti-drug policy of the Afghan government. In Bosnia and Herzegovina, some 50 Czech soldiers are serving in the joint Austrian-Czech Security Company at the Camp Eagle Base in Tuzla. The EU operation's mission is to preserve security and peace while eliminating corruption and organised crime and is also designed to support Bosnia and Herzegovina's progress in its way to European integration. But the country's biggest mission abroad is in Kosovo, where a Multinational Brigade with contingents from the Czech Republic, Finland, Ireland, Latvia, Slovakia and Sweden is to fall under Czech command next month.