Surprises of the June 2006 elections

This past weekend's elections in the Czech Republic confirmed some earlier predictions, such as the fact that the Greens would cross the 5% threshold and find themselves key to any future coalition-building efforts. But there were some surprises too, such as the fall-off in support for the Communists. In this week's Talking Point we take a closer look at these and other noteworthy aspects of the elections. 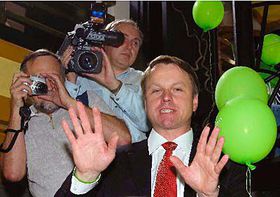 Green Party leader Martin Bursik, photo: CTK Pre-election polls suggested that the Czech Greens had a good chance of finally making it into parliament, and they have done so with 6% of the vote, which translates into six seats in the lower house. The Greens are newcomers to high-level politics in the Czech Republic, and political analyst Jiri Pehe explains their current unique position:

"I think that the Green Party is in a difficult predicament, simply because it is not naturally a right-of-centre party, yet it finds itself by coincidence (in a way) in the same camp with the conservative Civic Democratic Party and with the Christian Democrats, and that will of course put a lot of pressure on the Greens because the Green constituency consists of people who are more leftist."

"They will not appreciate attempts to cooperate too closely with the Civic Democratic Party. Of course we don't know how this will affect the group of Green parliamentarians who were elected—they may in the end be united as a group, but certainly the party itself is not very united, and I fully expect that any closer ties with the Civic Democratic Party may actually provoke some kind of backlash."

As the final election results were being tallied on Saturday night and it was already clear that the Social Democrats had lost in the race against the Civic Democrats, the current prime minister and leader of the Social Democrats, Jiri Paroubek, gave a highly charged and emotional speech in which he called into question the validity of the elections because of what he sees as an overly aggressive campaign targeting his character.

On this account, Paroubek said that he may appeal the election results and according to Czech law, he has ten days to do so. Jiri Paroubek also declared that the results of the elections are akin to the defeat of democracy that Czechoslovakia saw in February 1948, when the communists took power.

"I feel a need to say that democracy in this country has suffered a harsh blow, comparable only to that of February 1948."

As you might expect, Paroubek's speech has garnered much attention from commentators, and I asked political analyst Jan Bures how he views Jiri Paroubek's immediate post-election appearance: Jiri Paroubek, photo: CTK "I think that these statements by Prime Minister Jiri Paroubek were the consequence of his emotional situation. We have some information that the other politicians and leading figures in the Social Democratic Party did not agree with this very strong statement. So we don't exactly know what the future holds, but I think that the process of building a new leadership within the Social Democratic Party will begin."

Jiri Pehe adds his interpretation of Jiri Paroubek's speech, and what we may expect in terms of its consequences:

"I think that Paroubek made that speech—and I think people in his party understand it—under a lot of pressure. He was certainly right to be upset because some charges that had been made against him before the elections were really outrageous. At the same time, of course, he really didn't behave as a democratic politician who despite his anger recognizes the results of the elections with grace, and so on. Nevertheless, I think that his own party will not be the biggest problem—the biggest problem may be Czech voters because many people saw his speech, listened to it, and I think that many people are not happy with what he had to say. On the other hand, I think that many people—especially Social Democratic voters—probably identify with him in his anger because the level of mud-slinging during the election campaign was really enormous."

Did he not go too far in comparing the results of the elections to February 1948?

"I think that his vocabulary was the biggest problem. It wasn't the fact that he made the speech and he refused to recognize the elections as valid—that happens in many democratic countries and we saw it recently in Italy, and in the United States a few years back—but the problem was his vocabulary because in the Czech Republic the notion of the February putsch has certain connotations and to compare democratic elections with the communist putsch of 1948 is very unfortunate."

Jan Bures Jan Bures has this to say about Paroubek's analogy to February 1948:

"I think it's absolutely nonsense in Czech politics to say that we are in February 1948. The problem is that the Social Democratic Party is in the position of being the victim of an aggressive campaign run by the right parties, and a part of the media, etc. The Social Democrats see themselves as victims of this aggressive campaign. This is an emotional problem but it has nothing to do with the results of the elections."

Now in your opinion was this so-called viciousness in the campaign one-sided, was it only the ODS party that participated in such tactics, or was the Social Democratic Party itself a part of this process?

"Of course, it was more complicated. Both the right parties and also the left parties ran very populist-oriented and aggressive campaigns against each other, but in my opinion, there was a negative atmosphere created in the Czech Republic against the left parties, against the Social Democrats, against the Communists. For example, many journalists and politicians were very aggressive. So I think that this situation was worse for leftist parties than for right parties." 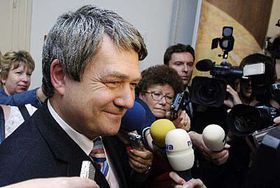 Communist Party leader Vojtech Filip, photo: CTK Since the early 1990s and the beginning of a new political era in the Czech Republic, the popularity of the only unreformed Communist Party in central Europe has often been used to gauge the success of post-communist transition efforts. For some, one of the surprises of the June 2006 elections was the decrease in support for the Communist Party—they logged 12% of the vote, losing a large number of their seats: they won 26, a massive drop from their current 41 seats in the Chamber of Deputies. Jiri Pehe explains why the Communist vote lost support this time around:

"When the voter participation is higher, the communist vote goes down simply because the Communist Party has disciplined voters and it has benefited in the last three years from the fact that voter turnout was very low. The moment we reached 65% of voter turnout, the Communist Party has about 12%. Another reason is of course [Jiri] Paroubek, and this is something that we should be thankful for, because I think he managed, with his rhetoric and with his policies, to attract a significant number of communist voters and take them away from the Communist Party."

Richard Falbr, a Social Democratic Member of the European Parliament, agrees with this assessment:

"I think we have taken a lot of their [the Communist Party's] votes. Maybe some of the Communists—because of the fact that the Communists cannot make a coalition with anybody—came to the conclusion that they did not want to waste their votes and they voted for our party."

So with the Greens in, Communist support down, and an as-of-yet uncertain coalition in the early stages of negotiations, the recent elections seem to be only the first phase of what will likely be weeks - if not months - of political struggles in the Czech Republic.