Strangely enough for a report about an art exhibition, we start at a train station - the Main Train Station in the centre of Prague. And this is where on May 1st, International Labour Day, an exhibition aptly called "Workers" was opened by its author - one of the world's most respected photographers - Brazil's Sebastiao Salgado. 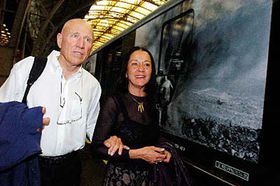 Sebastiao Salgado at the opening of the exhibition 'Workers', photo: CTK But why are the precious works of such a great artist on display on a train? I was sceptical at first but it's clever and very refreshing... and adds to the atmosphere of the theme - workers. Jana Bomerova from the Leica Gallery Prague, which organised the exhibition, is relieved to see the project has been well received:

"The thought of holding this exhibition in a train first came to us when we realised that we did not have a suitable gallery but also because we really wanted to bring it to a place where people do not have the opportunity to see such a big exhibition. When we exhibited Sebastiao Salgado's Exodus exhibition at a gallery in Prague a few years ago, I met a man who came all the way from Ostrava just to see the exhibition - that's a 4.5 hour train ride each way. He told me he wouldn't spend any more time in Prague because it was too expensive for him. That's how we got the idea, and thought: why not bring the exhibition to the people."

Sebastiao Salgado: "I am very happy to have an exhibit here that is shown in this way, inside a train that will tour the country. Sometimes, I feel it is a little bit unjust when you bring a show to a country and it stays just in one big city and the others [in that country] cannot see it because they would have to travel very far. So, to me this is the most democratic way and I think it's a very genuine and good idea and I hope that other shows will continue to be presented in this way, so that everyone can see it."

Three Czech Railway carriages have been turned into exhibition spaces and Sebastiao Salgado's eighty-one black and white photographs show manual labourers working in various industries ranging from tobacco to oil. The exhibits were selected from 250 photographs that were taken over a period of six years in twenty-five countries around the world. These include Kuwait, Cuba, Bangladesh, Rwanda, but also France and Britain.

And if you thought most of today's products are manufactured and produced by machines alone, think again. Many of us tend to forget that, no matter how modern today's technology is, countries - even the developed ones - still use a great deal of manual labour in industry and agriculture. 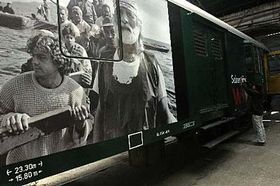 Workers, photo: CTK After meeting so many people from various walks of life Salgado has come to what to many might seem an unexpected conclusion.

"A worker in Cuba, for example, working in sugar cane, had more in common with a sugar cane worker in Brazil than a Cuban tobacco worker, who was working a few kilometres away from him. This means that it is not the men who make the product but the product, which forms the man. I also worked with steel workers in France and in Ukraine and they were the same workers, there was no difference between them. They behaved like steel workers, they had the faces of steel workers and in their work place they behaved the same way. So, it was the steel that formed the workers. I worked in 25 different countries during this project but with the same families."

Here is the view of one exhibition visitor: 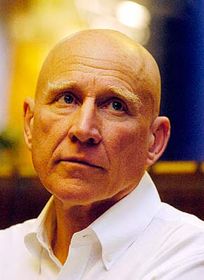 Sebastiao Salgado, photo: CTK "I liked it very much. The pictures are great. It was just quite surprising to see such photos and such work conditions these days. The gold mine in Brazil was very horrible. Such a large mass of people in the ground...it was very horrible. I would have expected the world to be more developed."

This is just what Salgado intends:

"I don't want to create a bad conscience for those people who look at my photographs. What I want to show is a reality that we can look at and try to understand, participate, and try to see if we can change the way of life everywhere and live a little bit better. Of course, it's a very idealistic point of view but I think it is possible."

And Sebastiao Salgado has given it all he can. Since photographing workers at oil wells in Kuwait, he has not been able to hear well because the noise at the wells is just like standing next to the turbines of a jet.

"Six years is a lot of time I spent on these photographs. When you come to photograph people, you sometimes spend a lot of time with them - weeks and sometimes months. You become part of the group that becomes your life and you not only speak together but you also become friends. So, this kind of photography is a way of life. You know, I come from a country that is 17 times bigger than France. Brazil is a country where we have an incredible mixture of races, migrants that come from all over the world and sometimes things happen in one region where the distances are further away than between here and Moscow. And this global concept of distance and space is one that I was, in reality, born into. I believe that photography is a universal language. It has an incredible power to transmit an idea."

Now, you've told us what connection you, as someone who come from a large and diverse country such as Brazil, have with the project. How can Czechs connect to it - a nation, which itself has experienced forty years of communist rule in which the 'worker' was very important?

"You people in the Czech Republic lived under a kind of dictatorship that was in the name of the working class for close to half a century. The concept that I used to do this project was inside the idea of productive work, the kind of Marxist concept of work. When I started taking the photographs, we were changing our ways of production, our behaviour, and we were changing politics. So they were photos that I believe showed the end of a time."

As Sebastiao Salgado said earlier, the aim is not to give the more fortunate people a bad conscience, when they view his photographs...but I certainly left the room a changed person. Next time I make myself a cup of tea, I will remember the intense manual labour that went into it: the thousands of labourers - some of them children - who work from morning to night, sometimes under appalling weather conditions, picking the herbs for my cup of tea.

Starting in Prague, over a period of three months, the train will travel to ten other cities and towns around the country. You can find more information at www.lgp.cz 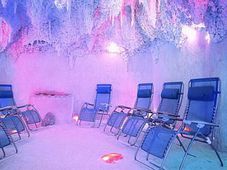 Salt caves have become a wellness hit in the Czech Republic. Vaclav Havel's hands of glass are the first in a future Hall of Fame.…