"Medicinal beer spa" opens in West Bohemia - but is beer really good for you?

There's nothing like a cold beer at the end of the day to ease those stresses and strains. The small Chodovar brewery in West Bohemia has taken the healing power of beer to the next level - and opened the world's first medicinal beer spa. But does a "beer bath" really have healing properties - or is it just a publicity stunt for the beer industry? 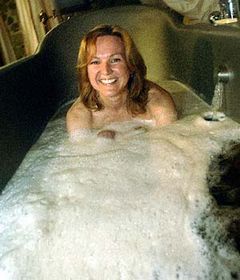 Photo: CTK There are dozens of spas in west Bohemia, but none quite like this one, where the active ingredient of the spa is beer. I'm sitting in a huge metal tub, in a combination of mineral water, beer, hops and yeast, all mixed together. The spa's owners claim that this has medicinal properties, and that sitting in this combination of water and beer is actually good for you. With me is the general manager of the spa, Mojmir Prokes. Whose idea was it to build a beer spa?

"Last year we built a hotel here, with 90 beds, and we wanted to give the guests a good service. So we tried to create a wellness centre here."

"It's really good. We work with a doctor, and I can say it's very good for the skin and for the hair." 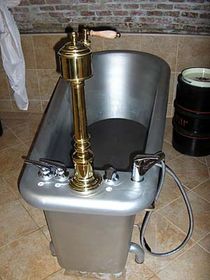 Tell me how it works.

"You have a bath of mineral water. The mineral water comes from a very good spring, 6km from here, and then we add 8 to 10 litres of special bath beer."

"Bath beer is a special sort of dark beer produced in our family brewery Chodovar.

This is beer that you can drink as well?

"You can drink this beer, it's very good. But here in the baths it's warm, so it's not good to drink."

Of course, Czechs don't like drinking warm beer, they prefer cold beer, unlike the English...I should explain that at the head of the bath there's a huge brass tap, and that's where the beer comes from. Ah - now the beer has arrived. This is a very important part of the cure, not only to lie in a vat full of beer, but also to drink it as well. So this is a glass of Chodovar lager? 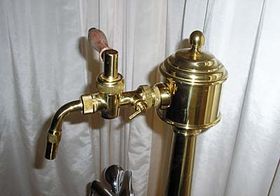 "Yes, it's a light beer, not too much alcohol. So you get a good feeling, to have the warm beer in the bath and the cold beer to drink."

So I should sit in this bath for 25 minutes, just enjoy it I suppose, and relax.

"Yes, that's it. We want guests to enjoy it, to take a break, to drink, and to speak with friends."

The beer spa was a highly pleasant experience, but I still wasn't convinced it wasn't all a highly elaborate joke. So I went to see one of the people who came up with the idea in the first place, Chodovar's chief brewer Jiri Plevka.

"No, it's not a joke. The idea to take the beer as a mixture in the bath is very old - it came from ancient Rome - and everybody knows it's really healthy."

How can it be healthy? Beer makes you fat. Alcohol isn't good for you. How can bathing in beer and then drinking it be good for your health?

I suppose it's mainly men who use the spa? After all it's every man's dream to be able to sit in a bath filled with beer.

"It was the dream of many men, this beer bath, to swim in beer, and now it's reality. But it's not a joke, and I think it's a very good thing to also take women along too. I think women will also be very interested in this health procedure, for their skin."

Claims like that have been met with anger and disbelief by those who are trying to get Czechs to consume less, not more beer. Among them is Dr Karel Nespor, one of the country's leading anti-alcohol campaigners.

"This so-called beer spa is heavily financed by the alcohol industry, and we in Czech have a proverb that 'the bread you eat, the song you will sing'. So this information is heavily biased. This humbug is a public relations exercise by the beer industry."

You're saying there are no medical facts behind this.

Beer is so much part of Czech culture though. Beer has been so important in building the Czech identity. Surely your voice is very much in the minority. So you won't be visiting the beer spa then?

"Definitely not. I'm afraid that after some time we might be treating former patients of this beer spa, here at our alcohol clinic. I've met many people with severe skin problems, skin diseases, unsuccessfully treated by top medical specialists. But when they stopped drinking alcohol, their skin conditions improved. So, abstinence is much better for the skin than beer."

For Karel Nespor, beer is the problem. For Jiri Plevka, beer is the solution - for everything from high blood pressure to dry skin. Who knows who's right. But one thing's for certain. The Czechs still lead the world in per capita beer consumption, and they're not going to become teetotallers any time soon.