The Czech media is regularly ranked as one of the freest in the world, but recent events have called into question how well that freedom is utilised where political extremism is involved. Stemming from a number of heavily publicised incidents in recent weeks, many people are asking if it’s in fact media attention that’s actually feeding the occurrence of right-wing extremism. This week’s Talking Point discusses the events that have brought the journalists themselves into the spotlight. It’s election season, with voting for the European Parliament coming up this weekend, and every political party wants to get its message out and be heard. Political parties though also include radical organisations whose messages are often ostensibly racist and violate the country’s anti-fascism laws. This hasn’t stopped those parties from seeking attention however, and they have been doing so for the last several weeks, leaving the media in a quandary over how to react. Should it ignore radicals and find itself accused of not doing its job, or risk being accused of promoting extremism when it reports on their activities. Opposing views are not hard to come by.

Political scientist Jan Charvát has dealt heavily with the issue of extremism and the media. 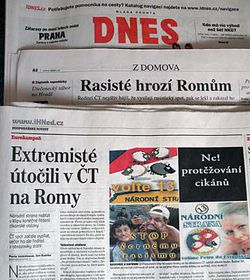 Jaroslav Veis is the former editor-in-chief of the Czech daily Lidové noviny:

“Extremism in the country is a problem, it’s a fact, and we have to face it. And the second thing is we have to inform about it. So I think it’s quite important to inform about the problem. Another question is how it’s done. If it were just stressing conflict situations while trying to get some kind of sensationalism out of it, that would be bad. But my feeling is that the Czech media is not just trying to get better readership.”

Incidents involving right wing extremists have been mounting. Frequent demonstrations around the country have pitted neo-Nazis against the police on a number of occasions in the last month and there have been two Molotov cocktail attacks on Romany families, one of which left a small child in critical condition. These events were all meticulously - as some would have it excessively - reported on, culminating in two high-profile controversies on the part of the media. The first was an interview with a leading neo-Nazi published in the Czech Republic’s leading broadsheet, Mladá fronta Dnes.

“In this interview the interviewee said a lot of things but he didn’t say the truth. And this was an advertisement, not the truth about him or about the right wing. It was just about what he wanted to say. And the guy who made the interview was not able to work with the situation. He was not able to say, ‘well, you say you are against violence but in fact you were charged with violence many times in the past so how do these two things go together?' Of course we have to talk about extremism, but we have to talk about it the way it is, not in the way the extremists want to be seen”

Mladá fronta has not faulted itself for the controversy, arguing their intent was to give equal ground to everyone and noting that they have also done interviews with communists. The same ethic however landed Czech Television in deep water a couple of weeks later. The public broadcaster aired a pre-election clip for a nationalistic political party calling for “a final solution to the gypsy question”. While Czech Television did apologize and pulled the commercial, it was the last drop for many people who see the media’s ability to deal responsibly with hard issues as being fundamentally flawed. Martin Kovalčík works on social integration programmes for the Czech charity foundation People in Need:

Klára Kalibová is a lawyer for Tolerance and Civic Society, a watchdog organisation that monitors extremism. In Ms Kalibová’s view, the problem very much resides in a corporate media comprised mostly of thirty-somethings who were thrust into a media elite after the Velvet Revolution, and lack the experience, education and mentorship to be able to look critically at their own work.

“The only ethic that most of the Czech media has is the ethic of their owner, so they write what their owner thinks should be written. And what the owner thinks will attract people to buy newspapers. Also I think what we lack – or what the Czech media lacks – are journalists around the age of 40 and 50, the middle generation from which younger journalists could learn a lot of things. It’s maybe the explanation for the situation within the Czech media, not just concerning right-wing extremism but any kind of political issue.”

Ways to improve the situation are being sought. A symposium on the subject of extremism and the media was held by Charles University to address the issue among academics, media experts and members of the media themselves. This however was a once-off event, and any lasting solution will evidently have to be methodical and long term. Ms Kalibová and many other experts suggest the most obvious recourse is to look abroad.

“For example in Sweden, when there was an increase in racially motivated crimes, the four main media agreed to publish photos of the top neo-Nazis in the country giving their names and what they are guilty of. So the media in Sweden were able to uncover the neo-Nazi movement and were able to say they disagree with the violence and with the anonymity of neo-Nazis. So if the Czech media would be able to do such a campaign it would be nice. They should also write about the neo-Nazi movement, but not by saying ‘they’re just silly boys, doing nothing, just shouting.’ They have to understand that the neo-Nazi movement is a very big problem for certain groups of people. There are a quarter of a million people who feel unsafe in their homes and nobody cares about them. For example there was an arson attack 30 days ago and the police are not able to discover who did it. So these are ways in which the media could be very active. They can go after the police investigation and ask the police why they are not investigating properly.”

2009 marks 20 years since the fall of communism, but even that space of time seems not enough to fill the many voids left by revolution – in this case what many feel is a lack of an authoritative and responsible media corps.