The Clinic for Paediatric Oncology in Prague celebrates its twentieth anniversary since its foundation in 1983. Dr. Guilio D'Angio and Prof Audrey Evans are renowned personalities who have devoted their lives to helping children with cancer fight the disease in the United States. They came to Prague to honour their colleague Dr. Koutecky, one of the founding fathers of the clinic, who retires this year. In this week's Talking Point, Dita Asiedu speaks to these two important personalities and Dr. Tomas Eckschlager, the head physician of the clinic's laboratory, about the problems the Clinic for Paediatric Oncology in Prague has had to face and the development of paediatric oncology as a whole:

AE: "It's developed because there are more drugs, better information, better ways to use what we have and so the success of treatment is considerable for twenty years. Twenty-five percent improvement, perhaps even more and the children are living longer and more are cured. So, it's been a great advance."

DA: Now, how has the clinic developed? What was it like twenty years ago and what is it like today?

TE: "When we compare the results twenty years ago, only fifty to fifty-five percent of children suffering from malignant tumours survived. Now, between the years 1995 and 2000, seventy-five percent of children survive. I think it is similar in other western countries. It is thanks to better chemotherapy, radio-therapy and also our co-operation with other departments such as surgery and the x-ray department because they examine our children. We have also established our own laboratories because it's important to examine tumours of our patients. According to the results of molecular examination we may plan therapy."

DA: What would you say has been the clinic's biggest accomplishment throughout its twenty years?

TE: "The best thing is our better results. We have also started caring for children who are cured from cancer but may have some later effects of the cancer or of our therapy. It is therefore necessary to follow-up on those children throughout their whole lives. Every year we get approximately 150 new patients with malignant tumours and more than one hundred patients with other diseases - sometimes children are sent to us with a different diagnosis and when we perform the diagnosis we find it is not a malignant tumour. We have approximately seventy employees."

DA: Will the drastic budget cuts that are part of the government's plan to reform the public finance system affect the clinic?

DA: What is the most common type of cancer found among children?

TE: "The most frequent are brain tumours, lymph node tumours, Wilms' tumour, which is a kidney tumour, neuro-blastoma, and soft tissue sarcomas. Child tumours are absolutely different from adult tumours."

DA: What area do you think needs to be given more attention to?

AE: "I think we have almost reached the extent of what we can do with the drugs that we have. They are very damaging to children. They are very strong drugs and in spite of what we can do and get a child in remission so that the disease apparently has disappeared, it can come back later. So, I think what we need now are more biological drugs - drugs that work not just from killing cells but using the cell mechanism so that we can prevent a relapse. So I think our treatment should change from all the things we can do now and then add additional non-toxic new compounds that will prevent the disease from coming back."

DA: How much effort is being put into research?

GD: "In the Czech Republic, in Czechoslovakia actually, despite enormous difficulties that confronted physicians and pioneers like professor Koutecky, he nonetheless with his group had been able to bring the concepts of North America to the people of the Czech Republic, which is co-ordinated care. We really have to remember that curing a child is only a part of the story. The treatments that we use are two-edged swords. Not only do we try to get better survival but also a less long-term morbidity. And this is something that this team has tried to emphasise as well - to use as little treatment as possible to nonetheless get a rising survival."

TE: "We have our laboratories and we also do some clinical and laboratory research. It is partially financed by charity and mostly by different grants from the Health Ministry's internal grant agency or from the grant agency of the Czech Republic. We have four grants and have successfully finished seven grants and have relatively enough money for our research."

DA: So, that's good news but what is the biggest problem that the clinic is facing at the moment?

TE: "Sometimes we have problems to get new doctors because nobody wants to work in our department. It is hard work and it is not easy. For young women especially, it's very difficulty to see such seriously ill children. Now, we have a full staff but I don't know what we will do with this situation."

GD: "Well, the stress on a physician looking after very sick children like those with cancer also must be taken into account. And one of the reasons why there isn't too much trouble in recruiting physicians into the field of paediatric oncology is that it offers an excellent opportunity for basic science research in the sense that the malignant cell in children clearly is malignant because of its own nature. These children have not smoked for fifty years, they don't have an outside influence and therefore one can really look at the genetic make-up of the cell and why it behaves the way it does. So, it attracts very bright and very inquisitive minds because they can see something other than running a well-baby clinic where it isn't very challenging. Nonetheless, the stress on physicians must not be underemphasised."

Dr. Pavel Boček is a Czech child oncologist who works at Motol hospital’s children oncology ward, sees patients in his own practice… 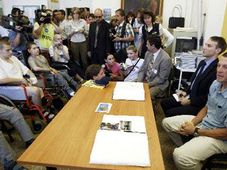 Less than a week after his historic sixth consecutive victory in the Tour de France, US cyclist Lance Armstrong visited Prague for…