If a dance club could be a work of art then Palac Akropolis would be perfect to fit the bill. For years now it has been a favoured venue here in Prague attracting young people from all over, both locals and visitors from abroad. A place where students, professionals, artists, and intellectuals can come to see performing bands, to dance, or simply to take in the scene...

"So far, it seems pretty good. I mean like, I got here, and everyone has been partying... I love it."

What does the Akropolis have going for it? For one, a variety of imaginative areas: a newly designed concert-hall, a café and a dinner lounge designed with quirky elements and found objects by Czech artist Frantisek Skala. The interior is a little like some old-fangled submarine, playful and sometimes a little ironic. Downstairs, though, there is a more mysterious mood, a more exciting sensibility that is darker but still very laid back. There is a gallery and two dance rooms to choose from, offering different styles of music on any given night.

"I'm here often and I discovered this place way back... and I think it's perfect."

Jan Sturz, nicknamed Dexter, is an avid club-goer and experienced Footbag player who finds no fault with Akropolis. His friends and competitors are in Prague to take part in the Footbag World Cup currently under way. On this night an impromptu Hacky-Sack match - a game called 4square - is even taking place in the club's foyer, the crowd there spilling out into the street.

"I think the Akropolis - the place itself is special because it was made out of an old theatre, right? There was a theatre here before... and now it changed into a club and it has lots of scenes where they play different styles..."

Different styles and different rooms, with the divadelni bar - or theatre bar in English - an intimate chill-out space as one of the crowd favourites. Even on a weeknight this space is often packed. Smokey, dark, a little bit worn and fashionably grungy, it features a heavy but smooth wood and steel bar right out of a William Gibson novel, a low-lit back wall behind stocked with bottles, several bartenders - men and women - working the shift. One of the cuter ones in a fish-net something seems to attract the most attention. Asked if she likes her job she smiles and says she wouldn't be there if she didn't...

Meanwhile, the DJ plays, evidently getting a kick out of his work, communicating with his listeners from his own black-lit corner, something the club's manager insists is a must. Communication - the crowd - the DJs - the music. There is dancing, making out, talking, making new acquaintances, generally having a good time. One just getting to know the Czech club scene could do worse than start here. At the end of the night is anybody unhappy? Perhaps only the bored and droopy-eyed police patrolling the block who hush the footbaggers back into the club.

Their reaction, though hardly surprising, betrays little understanding for club goers or the club scene. They say they wouldn't care if the people lay on the street, if only they would be quiet.

Finally, there is one added gem to visiting Akropolis, that part of town. If you leave late at night your walk just might take you by the Zizkov TV tower, rising some 200 metres above the city. As you go take good notice of artist David Cerny's giant space-age babies crawling up the sides. Late in the vening or early in the morning it's an imposing sight. You'll feel both a little humbled but also invigorated - ready to hit the town on a new day, and check out some of its many other interesting venues. 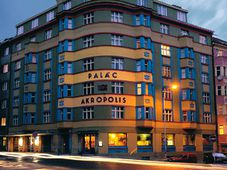 Palác Akropolis, one of Prague’s most important arts venues, will celebrate a double anniversary this upcoming season: It is 90 years… 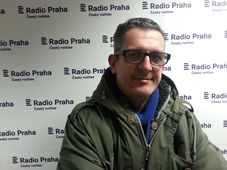 The frontman of Prague band The Prostitutes, Adrian T. Bell this year picked up the Apollo critic’s award for best Czech LP of the…