Žatec – the home of hops

For centuries, the northern Bohemian town of Žatec has been the centre of hops growing in the country. Known as the home of hops and beer, the town is now trying to cope with a decline in its traditional industry. It recently launched a multi-million euro tourism project called Temple of Hops and Beer – but it is also slowly coming to terms with recent history that saw the town’s original German population replaced by Czechs in the aftermath of WWII.

The town of Žatec, also known as Saaz in German, lies some 70 km north-west of Prague on the foothills of one of the mountain ranges that form Bohemia’s natural frontier. It’s one of the oldest Czech towns, and was once second only in importance and splendour to the capital of Prague. While the days of Žatec’s former glory are long gone, the town is still surrounded by hop farms. But even the ‘green gold’ has seen a slow and steady decline over the last decades. Vladimír Valeš is the head of the local Hops Museum. 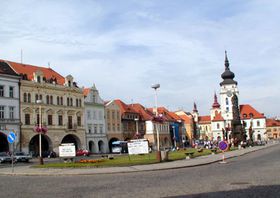 Žatec “It’s facing pretty much the same problems as all areas of Czech agriculture, which means it’s fighting to survive. Hops are now grown on some 5,300 hectares in the whole country. The most common type of hops comes from here, called Saaz hops. But if you look back in history, you’ll see that before World War II, hops were grown on some 19,000 hectares, about four times more than today.”

The Hops Museum in Žatec, located just off the town centre, is one of the town’s answers to the recent drop in its traditional trade. It was established in 1997 by an association of local hop growers, and is the place to go if you want to learn more about beer’s fundamental ingredient.

“Under the new project, visitors will learn everything about the history of hops growing and processing. Hops have been grown here for more than a thousand years and so many Czechs believe they know everything about it, but when they come and see our exhibits, they’ll find out they do not.”

In 2004, Žatec celebrated a millennium since it was first mentioned in historic records. Its medieval town square was often used by filmmakers as a setting for movies like Yentl, directed by and starring Barbara Streisand, Les Miserables with Liam Neeson, and others. But Jiří Kopica, the head of the local history museum, says the town’s modern architecture is also worth seeing.

“People think of Žatec as a town of hops and beer, but it also has some great and wonderful architecture. The town never had much industry because hops growing provided a sufficient income for the town's 20,000 inhabitants. The hops growing companies had enough money and built villas such as you usually find in much larger cities. So the architecture is really outstanding, all you need to do is walk through the streets and keep your eyes open.”

The town’s main industry and source of wealth left many traces. To this day, there are more than 40 large buildings, often with chimneys, scattered outside the historic centre. All these warehouses and packaging plants were made obsolete by modern technologies, and the town is trying to use them in other ways – a couple of them now house the Hops Museum. Vladimír Valeš explains. 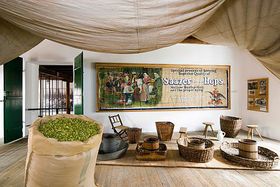 Hops Museum “The buildings housing the Hops Museum were all built in the late 19th or early 20th century as hops warehouses or packaging plants. The buildings have tall chimneys, because during packaging, hops were treated in sulphur baths. The whole harvest was exposed to sulphur dioxide which removed any remnant water and prevented mould and diseases. This was done until the 1980s; after that, they began storing hops in air-conditioned warehouses and all these buildings nearby became obsolete. Some of them are still used as warehouses for goods, but only a few have been revitalized.”

But the town has recently launched a much more ambitious project than that. It is now building the “Temple of Hops and Beer” – a huge visitor centre with state-of-the-art technology, a micro-brewery, a restaurant and even hops baths. It should work together with the existing Hops Museum, and bring tourism in Žatec to a higher level. 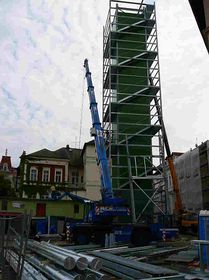 Hops Lighthouse “We were looking for ways of reviving the old industrial buildings. The result is the Temple of Hops and Beer, with the visitor centre that will celebrate the history of Czech hops. When you come in, you’ll see how people worked in the field, and how they enjoyed themselves after work. It will be a celebration of the hops that have been grown here for centuries.”

The generous project, funded mainly by EU money, is scheduled to open in September during the town’s famous hops harvest festival. One part of the town’s new tourist magnet-to-be, called Hops Lighthouse, is already towering over the town.

“We had to deal with the issue of dividing visitors into groups because these buildings have wooden floors that can only support some 20 or 25 people at a time. So we decided to build what we call the “Hops Lighthouse”, a tower that reaches the height of all the chimneys around. It’s 42 metres tall, and it will have an elevator which will hold a certain number of people and will take them to see what’s inside.”

But some might object to the town celebrating the history of Czech hops. Until after WWII Žatec, or Saaz, was populated by ethnic Germans. Around 3 million of them were expelled from Czechoslovakia after World War II, and the whole area, known as the Sudetenland, was repopulated by Czechs. This lead to a major disruption of the area’s development and the destruction of many towns and villages that had to give way to coal mining and other industrial projects. The head of the local museum, Jiří Kopica, says this has again become a serious issue. 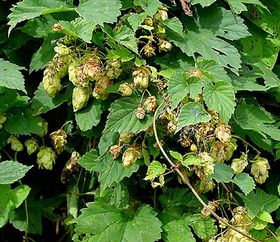 “There was a huge breaking point after 1945 which the town has only recently began to recover from. These days, the big issue here is whether or not to allow further mining in the area, and I think this is directly linked to the fact that Czechs were not at home here. The town of Most and hundreds of villages had been destroyed, and no one cared – they were building a brighter future. When they built all those power plants, no one thought of the people living here, because this was conquered territory and it was treated as such. I think it’s only my generation that has a problem with this attitude, because when you walk around the countryside here, you see it’s not healthy.”

In Žatec, medieval history, modern industry, post-modern revitalization of industrial heritage, and the country’s turbulent 20th century all come together. With hops and beer, all this makes Žatec a place you should not miss.

The episode featured today was first broadcast on March 10, 2010. 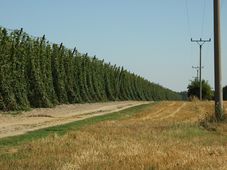