Theatre Minor - a story of puppets and clowns

After moving to a new venue in 1999 Prague's Divadlo Minor, or Theatre Minor, underwent extensive reconstruction, redesign that saw it re-launched as one of the most visually dynamic theatres in Prague. With a new theatre head, and a new team of players it has since established a fresh new repertoire and reputation, with technical stage innovations allowing for plays and performances to enthral children and adults alike in a manner of ways. Divadlo Minor is a puppet theatre - and as such it gives both young and old a chance not only to laugh but to let their fantasy roam. In a moment we'll be talking to theatre head Zdenek Pechacek about Divadlo Minor - the productions his team prepares and performs and we'll ask about some of the rewards of puppetry. Then we'll ask the kids what they think after viewing a couple clowns, well, clowning around on stage in a delightful short play titled Hura do Afriky, or Hurrah! To Africa... 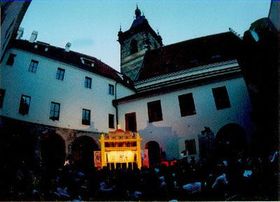 Divadlo Minor (Theatre Minor), photo: CTK Prague's famous Vodickova street: easy to get to, accessible on foot, by tram, by car - at the end of it, just off Charles Square is where you'll find Theatre Minor. A large building, the theatre is interconnected for several floors, bringing together management with box office with workshops where puppets, props, and costumes are made, and then of course the stage. It is found several floors down in the basement, a beautiful designed space that is a pleasure to visit - pleasant both to the eye and to the touch. For me, the first time I saw the space was earlier this year, when the theatre played host to Prague's Writer's Festival. The area, obviously designed with children in mind became a setting of even more wonderful quirkiness when full of adults - writers, journalists, photographers, all milling in the theatre's foyer. Utilising colours of all sorts that are mixed but never loud, and interior design in everything from the lighting to wall decorations, reinforcing a theme of playfulness. A child's small throne at the top of a dais. A cubby-hole in the wall (shaped like a keyhole) with seating for two or three. Lamps with little round faces. Even the stretch bar - though obviously for adults - is really a long wooden clownish figure doing a back-stand. Just like the little figure in the logo of theatre - a red clown with a little red cap. Those were design elements pointed out by theatre director Zdenek Pechacek when he showed me around. He explained some elements in the room served a functional purpose as well...

"Here in the corner in the foyer we have a little raised stage, where sometimes we can stage a small scene or have some musicians play. Now though, the area is full of small cushions, where a parent can take a child which is still very young and begins to cry during a performance because does not yet understand enough, or it simply doesn't like the play. The father can then grab a lemonade at the bar while the child plays in the corner..."

Very notable about the theatre is the interior - the mix of different colours - orange, green, blue. But they all somehow go together in a very tasteful palette... 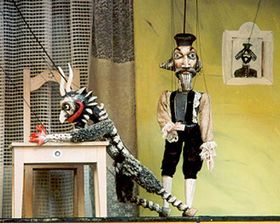 Divadlo Minor (Theatre Minor), photo: CTK "The artist Viktor Kodes tried to make the theatre as colourful as possible because after all children love bright colours, when you look at their rooms, it was all designed with them in mind. It's interesting that even the adults like it: that they organise company evenings here, film crews have their final wrap parties here, firms like using the space for their presentations. We could make a living just from renting the place, not even having performances. But of course that's not our mission."

The main mission is to perform, and the cast and crew at Theatre Minor go all out for that, writing and staging many original productions every year, the majority involving intricate stage and puppet design, and careful choreography and lighting. Thematically, most productions are written for children and performed in the mornings or early afternoons, often for whole visiting classes or nursery schools, though there are also more serious productions for adults. Almost all the productions sell out. Who would have thought that puppets would still be so popular in the information age? But they are. Perhaps even more than ever before. When I attended the kids viewing the performance that day absolutely loved it, laughing themselves silly in their seats. And I myself was reminded of my childhood and performances I saw as a little boy.

Meanwhile, Zdenek Pechacek explained the kinds of different puppets the theatre uses, explaining some techniques are far more difficult than they look:

"The queen among Czech puppets is the 'marionette'. Most of the time marionettes are made of wood, suspended either by thread-like strings or on a piece of wire. Spejbl and Hurvinek are two famous Czech puppet characters that use string. That is a very difficult technique to master for any puppeteer. Other marionettes use wire, which goes into the head and is anchored in the chest of the puppet. That kind of puppet is more dynamic and easier to manipulate. So much for the marionettes - but it's important to add that when one watches a marionette show viewers must sit directly en face to the stage, so that they do not see the puppeteer working above. We deal with this problem by literally raising the stage."

Another kind of puppet is the mannequin...

"That's a foam and fabric puppet behind which the actor hides. It can also be operated by two puppeteers, who animate its arms. That's quite a modern technique, that became popular in the 1970s. Usually you light from the side so the actor, who is dressed in black, is not prominent. Finally we have so called javajky - or Javanese, which are puppets manipulated from below. The actor holds it above his head and moves it using a special mechanism. We have special stage tubs which are lowered below stage level, so that actors can work standing up, and not on their knees. Their puppets appear amongst the decorations above."

The majority of productions that one can see at Theatre Minor are puppet plays - fascinating performances such as the mystical legend of the Golem, the story the clay statue turned to life by Rabbi Low to protect the Jewish people. But some performances use no puppets at all - only actors, stagecraft, and props. The day I attended - I should say conspicuously on the heels of two nursery school classes - the play was Hurrah! To Africa, featuring two very funny clowns...

"This performance is interesting because it is acted in the so-called 'arena' - which means that we set several rows for seating on the far side of the actual stage, so that the action takes place in the middle. Its a show intended for our very youngest audience who are in nursery school. We also make the space more intimate using a curtain - you have to imagine that sometimes a little boy or girl aged three or four in the theatre for the first time will get scared and begin to cry when everything goes dark. So we try to set an atmosphere that is sort of like a school playroom. There are no puppets in this play, but a lot of props. The story is about two clowns who receive a letter from Africa from their postal worker, and it is a nice, nostalgic kind of story. It is among the real favourites for little kids."

Well, I have to say I still have still have a lot of common with the most wee children who saw the performance of Hurrah! To Africa... although I won't admit I was scared of the dark. I did laugh, spurred on by the laughter kids and even their teachers, as the two clowns, one named Bobo, bumped around on stage in original slapstick scenarios. Always absurdly greeting each other before getting into another scuffle. Fascinating was the lady from the post office who delivered a large trunk and letter from Africa, truly by then all our imaginations were soaring. And so what if I'm 32. I hadn't been in a children's theatre forever.

"I liked the kiss the most."

"I liked the way the two clowns got to know each other. The way it went "Trrr!" when they shook hands."

And so it goes. Theatre Minor - a pleasure to visit. I am sure I will go back soon - next time to see a performance for adults.

If you'd like to have a look at what some of the puppets or the design of Divadlo Minor looks like, why not visit their web site? It's www.minor.cz 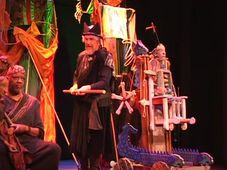 Vít Hořejš: puppets can be better actors than people

Actor and puppeteer Vít Hořejš was born in Czechoslovakia but spent most of his life in the United States, where he emigrated in his…