The inside story of the history of Prague’s Pankrác prison

Pankrác is a byword in the Czech Republic for the large prison that stands a little way outside the centre of Prague. The prison has been the focus for much of the worst and some of the best that has happened over the last 120 years. Appropriately, some mementos have been stored for posterity.

After getting through the main prison entrance, it is a short walk to a functional block that served as the main Gestapo execution block at Pankrác prison during the Nazi occupation. It is there that a small museum and memorial has been opened.

It actually gives a pretty broad description of Czech penal history starting with the castle prisons of the medieval ages. By the end of the 18th century and in spite of a temporary enlightenment move to abolish the death penalty in the Hapsburg Empire things were not that much better. That much was clearly testified by the notorious prison at Brno’s castle.

Otakar Michl is one of the prison’s educational staff and an occasional guide at the centre:

“As far as I know, one lifer survived almost two years in these bloody conditions in Brno’s Špilberk castle. The average was just six to eight months. The conditions were really very tough. The prisoners were chained all the time and the space was around two by two metres in the cell, maybe less.”

Pankrác prison was created in reaction to those sort of conditions on a 14.4 hectare site on Nusle plain that was then well outside Prague but is now firmly in the suburbs.

“Pankrác prison was established in the 1889 and substituted the much older prison of St. Wenceslas near Charles Square because of the very bad conditions. It was intended as a maximum security prison for men and later, after let’s say about 30 years, they also opened correctional units for not so serious crimes.”

As well as the normal sort of serious crimes such as murder and arson, bigamy and political radicalism could also get you behind bars in the early days of Pankrác. The prison counted shared cells for 552 prisoners and single cells for 315.

All in all, the facilities on site were pretty varied, but they evolved over time.

“We can see some buildings which do not exist any more, for example, the bakery and a huge laundry at the back of the prison. A hospital which was built at the same time as the prison today is much bigger and you can see in the corners some spaces for recreation with circles. The reason is the prisoners had to walk in circles during their exercise. These yards are no longer used. The church was abolished at the beginning of the 1950’s and today we have a gym inside for prisoners.”

The newly created Czechoslovakia made few fundamental changes to the system. The prison capacity was expanded to 1,169 and a unit for pregnant women prisoners from all over the country was set up as part of the hospital. 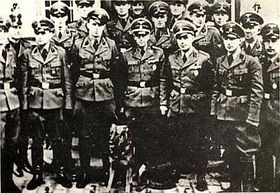 Gestapo The prison earned a grim reputation during the Nazi occupation when its services were in heavy demand. In fact, there were basically three prisons in one on the site: one serving the Czech judicial machine, one the German, and a separate Gestapo prison. Overall, prison capacity was boosted to 2,200 in the early days of the Nazi occupation, becoming the biggest prison in the country.

The Nazis installed a guillotine to speed executions up and the instrument is still on show in the original white tiled room. Under the Nazis, an execution spree followed after the assassination of acting protector Reinhard Heydrich in 1942 and the last execution was performed on April 26, 1945, just a few days before the war ended. 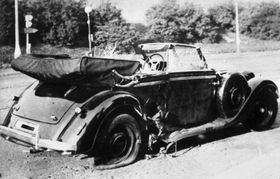 Protector Heydrich’s car after the assassination, photo: Bundesarchiv, Bild 146-1972-039-44 / CC-BY-SA / Wikimedia Commons 3.0 “We are standing in the original place which was used for executions in the war by the Nazis. They executed using a guillotine as you can see. They dismantled it at the end of the war and threw it into the Vltava river. But the Czech people saved it. This guillotine executed, according to the executioner’s record, 1,176 people here.”

A series of hooks also on display are believed to have been used to kill Jews.

Justice was indeed summary. It usually took around three minutes for the men and women prisoners to be brought in from a nearby death row, appear before a special jury and have the sentence carried out. 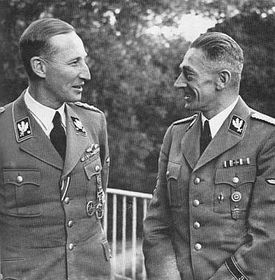 “Alois Weiss was the head executioner and was a German. He had four assistants: two Czechs and two Germans. After the war the two Czech assistants were captured and later executed, ironically also here in Pankrác. Alois Weiss and his assistants escaped to West Germany. I remember in the 1970’s that the elderly Alois Weiss asked the Czechoslovak government to pay him a pension because he was a public servant during the war.”

The museum and memorial have other grim relics on show. “Here you can see the remains of the original Pankrác gallows which were used, I think, from the end of the 1940’s till the end of the 1950’s. They had two such gallows in Pankrác prison and unfortunately only these remains survived. In the 1960’s, they moved the execution place to an underground site in the prison.”

The gallows were used by the Communist regime that took power in February 1948, first on those they suspected of being opponents, such as democratic politician Milada Horáková, and later as witch hunts began within the party itself. Top Communist Rudolf Slánský was hanged there in December 1952. A special unit at the prison had been established by the Communist secret police as early as 1949, the year when the executions began.

In fact, the Pankrác site was a sort of judicial one stop shop. The show trials were held in the monolithic dark court building that stands in front of the prison. An underground corridor connects court and prison.

The names of those political prisoners killed by the Nazis and Communists are displayed.

There are some brighter aspects featured at the centre. These include the early attempts to actually reform prisoners and not just punish them. These even include some little known attempts to improve prisoner treatment and conditions in the 1960’s.

“In 1965 Communist Czechoslovakia was the only eastern country that adopted and accepted the standard minimum rules of the United Nations. In practice, this meant that specialists were introduced into Czech prisons, psychologists, pedagogues and so on. And also in 1965 an Institute of Criminology was established which assisted in the whole area of criminal law. They translated a lot of foreign literature, for example they introduced to Czechoslovakia the problem of drugs at the end of the 1960’s. And Czechoslovakia was the only country that was interested in these problems. But unfortunately in the beginning of the 1970’s, after the Soviet invasion, this institute was abolished.”

The little known museum and memorial can be visited by appointment only. Several hundred, mostly students, take the short tour. The centre is also for training current prison staff.

The episode featured today was first broadcast on April 21, 2010.