The Fort above the Black Forests - Kostelec nad Černými lesy

This week s spotlight focuses on one of the main centres of forestry in the Czech Republic and an oft overlooked pearl of Bohemian cultural heritage. Christian Falvey gives us his impressions of the town of Kostelec nad ernými lesy. 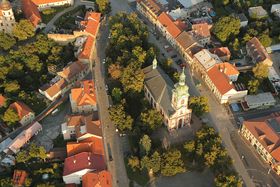 Kostelec nad Černými lesy, photo: Zdeněk Fiedler, CC BY-SA 3.0 Unported Past villages that would translate as Scrawnyville and Goat Eaters (which is not far from the town of Horse Eaters) and through the valley of the Devil s Trenches, is Kostelec nad ernými lesy, or, The Fort above the Black Forests. Though there is little sign of malnutrition in Vy lovka or gnawed bones and discarded horns in Kozojedy, the town of Kostelec nad ernými lesy does indeed rise out of a depth of coniferous forest on the road from Prague to Kutná Hora. Here s Pavel Karnet from the University of Forestry Enterprise:

Both the past and present history of Kostelec is very much linked to the deep woods around the town. They gave rise to a lumbering industry for one thing, which led to lumbering regulation and in turn to the University of Forestry Enterprise and a research institute. In addition to the university itself, the town of only 3600 people also has a 30 hectare arboretum and a strong forestry industry is also an important part of its life. As I wandered around the town hall I met Karel Michalik, an importer of seeds and saplings and the chairman of the local Association of Christmas Tree Growers: 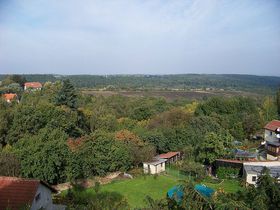 Kostelec nad Černými lesy, photo: ŠJů, CC BY-SA 3.0 Unported There s a big concentration of foresters here because there is a research institute and the forestry faculty of the University of Agriculture in Prague. And also there are a lot of foresters working for local forests and teachers from the university staying here. That s one of our advantages: we are partly a university city, like Prague! Of course, we are small, but anyway...

The university uses its premises here to give its students hands-on experience in the sprawling forests it owns in the environs, and also to provide them with a very special retreat. The campus , for lack of a better term, is not comprised of dormitories and instructional buildings but is housed in a gothic castle, reconstructed into a renaissance châteaux with elements of baroque.

The castle has been the property of the Czech University of Life Sciences since 1935. It serves as a place for practical training for students from the university, for example in silviculture, forest management, economics and many others. There are more than 1000 students coming to our university every year to do practical training in the castle and in our forests .

St Adalbert, today one of the figures standing precipitously on the edge of Charles Bridge, was said to have founded a castellum, or small fort, here, with a watchtower to protect a thoroughfare to Prague from bandits, sometime in the 14th century. With time - and a number of blue-blooded owners and Italian architects - the watchtower and embankment developed into the stunningly picturesque châteaux that the university uses as a campus today. What immediately strikes the visitor after the beauty of the castle itself is the lack of entry fees, guides, and roped-off corridors. This is a living castle where people work, live and study. Classes are in gaping medieval halls, offices boast 6-metre ceilings and enormous chandeliers made of antlers, and the walls, cellars, turrets and attics conceal secrets upon secrets. Secret corridors are said to run throughout the castle and escape routes are thought to have their exits concealed in mineshafts in the surrounding woods. And there is of course no dearth of ghosts and buried treasure. Resident history buff Ji í Neuhöfer: 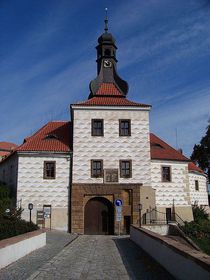 The castle, photo: ŠJů, CC BY-SA 3.0 Unported The walls of the castle conceal not only history but allegedly also the treasure of the Smi ický family. The treasure is said to be guarded by one of the Smi ický noblewomen, Kate ina Smi ická. During the reconstruction that was underway in 2001 a painting of a lady was discovered on a wall in a newly uncovered part of the castle. Her face however had been intentionally destroyed, and it s possible that a treasure hunter tried to upset the magical powers of the Black Lady who guards the treasure so that he might find it.

Of such a small town one could be tempted to say without the castle and the university there wouldn t be much here , but that would not be true. There is also a brewery. Such a fascinating brewery in fact, that the fact that they don t make any beer is almost beside the point. Milan Starec, the brewery s owner and refurbisher on what exactly he has in mind for the historic.

In 1987 the brewery completely terminated its beer production and since then the building has just been falling apart and all the original technology on the grounds was looted. So we are gradually reconstructing the whole building and doing the whole thing according to the original blueprints and using the technology that was originally used. Since all of the technology is not in place anymore we replace it with technology from other demolished breweries. The basic concept for the ernokostelecký Brewery is to create on the one hand a beer museum and on the other a gastronomic centre that includes, most importantly, a brewery . The brewery, photo: ŠJů, CC BY-SA 3.0 Unported The brewery is currently a mix of debris and development, with yawning holes in the ground and strewn rubble, and lofty, perfectly remodelled brewing tank-rooms and copper and marble bar counters. Walking back towards the town with its many old churches, decrepit early 90 s shop signs, its glorious spired chateaux and omnipresent peeling paint, one gets the feeling that the state of the brewery is a reflection of the state of the town itself: neglected, but truly on its way somewhere. Mr. Michalik, who is originally from Silesia, in the east of the country, told me about what brought him to the fort above the black forests, and what keeps him here.

I moved here some 20 years ago because I got a good job at that time here. Just after the revolution I started running my company here. So it s a nice city, there s a lot of potential for whatever you like. It s pretty peaceful and quiet, there are pretty nice people here. It s close to Prague so when you re interested in culture or being in touch with Prague it s a 40 minute drive. And we are close to nature as well, to the forests surrounding the city. So that s something I was trying to find, and I did .

The peace and quiet in this place devoid of any heavy industry or highway traffic is palpable and actually smells a bit of sap and sawdust. If that is what you seek, the wild woods await you and if not, the brewery is to open with a bash this summer.

The episode featured today was first broadcast on March 11, 2009. 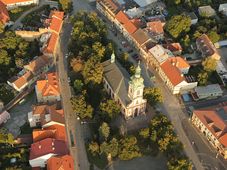 The Fort above the Black Forests - Kostelec nad Černými lesy

Catfood at the Corner Shop: the challenges of translating Louis de Bernieres

Our report this week comes from the third Literature Seminar in the town of Kostelec. For the last three years the British Council…