The continuing allure of Wenceslas Square

In this week's Spotlight we take you to one of Prague's most remarkable locations, Wenceslas Square, that expansive boulevard that features some of the city's most significant architecture as well as the most famous of all Czech monuments: a monument to the country's patron saint Wenceslas on horseback, that witnessed all the turmoil of modern Czech history: from the birth of the Czechoslovak state, to the Soviet-led invasion, to the fall of communism in 1989. A square that is also not without controversy: with far too many casinos and prostitutes in the late evenings to remain, well, fully respectable. History and its outcome for Wenceslas Square - that looked at in the programme today.

From the very first viewing Wenceslas Square is nothing less than imposing. 750 metres in length the square is Prague's longest boulevard and there's nothing quite like it on an early winter morning stretching out under an angry sky. At the top of the square, the National Museum rises up in the grey mist: a massive Neo-Renaissance palace with endless windows and a rising cupola that recall early Czech patriotism and the National Revival. Still, long before the square became a site for national sentiments, it was just a road, though a monumental one at that. A route ordered by King Charles IV himself to be used as a major artery for his projected New Town. I met with Olga Ambrozova, a specialist at the Institute for the Preservation of Historical Monuments in Prague, to discuss the beginnings of the important landmark:

"Wenceslas Square came into being as a central city route at the time Prague's New Town was founded by Holy Roman Emperor King Charles IV. That was in 1348, after the king made Prague his seat of power but realised the town needed considerable, independent expansion to the south and to the east. At the time Wenceslas Square was not a square per sae - but rather a strategic route between the eastern gate of the Old Town and the new part of city underway. In later centuries the route would become the site of a famous horse market - konsky trh - the title the square first bore."

Historically, the square would only be renamed 500 years later, a change initiated by Czech journalist and writer Karel Havlicek Borovsky, who pushed for the new name in order to commemorate revolutionary meetings on the square protesting Habsburg rule. The patron saint Wenceslas a Christian who ruled Bohemia in the 10th century, was a natural choice as a symbol of emerging Czech sovereignty and national identity. As Olga Ambrozova recalls, an earlier statue of the saint had already stood on the square, though in the middle and not at the top, as it does today.

"It's true that from 1680 an earlier equestrian statue of Wenceslas by the sculptor Jan Jiri Bendl stood in the middle of the square - forming part of a fountain. However, with increased crowds and traffic the piece became inconvenient. It was moved several times and finally removed to Vysehrad. It is true that the presence of the earlier work established a certain sculptural as well as symbolic tradition - one Czechs returned to in the 19th century. Czech sculptor Josef Vaclav Myslbek was one of those commissioned to create a new monument, which he worked on for a number of years. The monument forms what is actually a series of sculptures that were finally put into place in 1912."

Myslbek worked on his Wenceslas for some twenty years, making numerous and extensive changes before deciding on the final result: a proud, and undaunted figure with flag upraised, leading the Czechs forward, flanked by fellow saints Ludmila, Procopius, Adalbert, and Agnes. Wenceslas' resolute symbolism can not be underestimated - one reason the Nazis must have chosen the site for the country's swearing allegiance to the German protectorate - blunt and stupefying subjugation that laughed in the face of Czech statehood. Throughout the 20th century the site would repeatedly draw crowds, turmoil, and blood - witness the reels from 1968 as Czechs draped the statue with the flag, as tanks rolled by. The fall of communism and euphoria of 1989 would then drape the site with further symbolic meaning:

"It's true that Wenceslas Square became a place for public gathering, where political change and turmoil were always expressed and felt. It has become a tradition, it is a place where republican emotions are deeply felt." 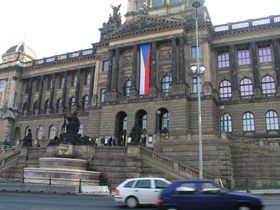 The magistrala in front of the National Museum If the statue of Wenceslas survived periods of unrest in one piece, Wenceslas Square has not. Sadly, both changes before and after 1989 have had a scarring impact on the layout and design of that monumental space. One of these was the decision by the former regime to stretch a major highway through the very centre of town, cutting off the National Museum. While some speculate the decision could have been politically motivated, that is a notion Olga Ambrozova rejects:

"I don't think that running the magistrala freeway through Wenceslas Square was a political act... if anything the damage done was an unplanned consequence. That said, the damage to Prague's central square was extensive. The main square was truncated, in effect destroyed as an urban concept. As for why it was decided the magistrala would lead through the top of the square? I suspect it was a decision of convenience by the communist ruling elite, facing pressures of growing Prague traffic. It was probably the quickest solution available then, as well as a relatively effective one. Nobody really thought about the negative consequences it would have."

Other important developments after the fall of communism included Wenceslas Square being hit by a major influx of traffic, tourism, advertising, reconstruction, and changing of property into private hands. Most buildings have been reconstructed according to original designs, though some have incorporated post-modern elements that have been the sources of controversy, but also admiration. Not all, however, agree.

"Wenceslas Square is of course part of a historic reservation protected by UNESCO, which means certain restrictions must be respected. That means that most of the buildings on the square must be considered complete - not seeing redesign or added elements. Most of the buildings are also individually registered. There are some extremely important examples of architecture from the First Republic, meaning between 1918 and 1938. Modernisation there is out of the question."

That has not, however, prevented new casinos and even nearby bordellos from emerging and giving a less than flattering definition to the square. Not happy about such developments, there is very little even the Institute for the Preservation of Historical Monuments can do. 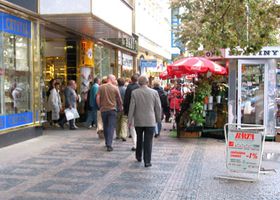 Wenceslas Square "Unfortunately the institute can not really intervene. Before the fall of communism there existed a law whereby individual city districts gauged the layout of shops, so that for instance you didn't have four pharmacies on one street and so on. After 1989 that law was abolished when property was returned to private owners. That's fine, but it also means we can not influence the content - what is supplied."

What is supplied - once horses, other times revolution, political upheaval, today the freedom to express one's self under the so-called horse, but also seamier excess: all that belongs to Prague's Wenceslas Square. To get a sense of its history, to project under shimmering eyelids its changing face from the days of horse-drawn carts, imagining the first electrical trams that used to crisscross the square, the tanks that rolled in, and the tourist crowds rolling in now - you may want to escape to one of the restaurants overlooking the square and take a good long look. After all, it's not often you can visit a place that has experienced so much, and still managed, for the most part, to survive. 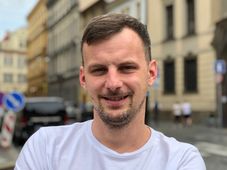 Prague’s first “night mayor” Jan Štern is tasked with finding ways to alleviate problems caused by noise and rowdy behaviour. But what…