Svitavy – the birthplace of Oskar Schindler

You are not very likely to wander into Svitavy by chance. Located on both the major road and railway line connecting Moravia and eastern Bohemia, for most people Svitavy is just a name on their itinerary. But if you do come and take a closer look, you’ll find a little town proud of its past and working for a better future. Once an important town for Moravia’s textile industry, re-populated after the expulsion of Svitavy’s German speaking inhabitants, it only recently showed its pride in perhaps its most famous native personality – Oskar Schindler.

Svitavy Svitavy got its name from the little river Svitava that rises near the town running south. A small settlement at a ford across the river, it grew into one of the biggest centres of the textile industry in Moravia. But the times when thousands of people moved in to work in its factories are long gone. One of the people to have recently come here to live is Daniel Lupton, from Michigan in the United States. He came with his wife two and a half years ago to help establish a church in Svitavy, and says that local people made settling in really easy. 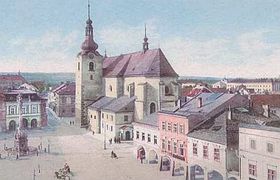 Svitavy in 1919 “I think I was surprised at the welcome Svitavy gave me. Even after two and a half years, I’m almost a celebrity here because I’m the only native English speaking person for many kilometres around. I was surprised that the schools opened up their arms and said please, come, and the mayor and everybody, the music programmes… I was surprised, and I still am, at how friendly and welcoming people are to me. There have been no negative surprises. I enjoy Svitavy very much.”

Svitavy was once called Zwittau by most of its inhabitants. The majority of the 10,000 people who lived here until after the Second World War were Moravian Germans, and Svitavy was in fact where the name Sudentenland and Sudeten German was first used to describe the German-speaking community of Bohemia and Moravia. Radoslav Fikejz is a historian in the local museum.

Ottendorfer Library “The term Sudety, or Sudetenland, originated in this region as well. A local librarian, Dr. Jesser, used this term probably for the first time in 1902. He used it as an analogy to the expression Alpendeutsche, referring to the Germans from the Alps. He was probably the first to call Germans in Bohemia and Moravia Sudetendeustche.”

From the start, the river provided water for the town’s textile workshops and manufacturers. The town square, recently restored, was soon surrounded by spinning mills, dye plants, and other factories.

Ottendorfer Library “Drapery, cloth-making and weaving was a natural way of making a living for the town and its inhabitants from the 16th century onwards. This period was also the golden age of the town. It became a major textile producer; in the 20th century, 133 textile factories were registered here.”

After the end of the Second World War, ethnic Germans, who accounted for more that 90 percent of the town’s 10,000 inhabitants, were expelled, and the town was re-populated with Czechs. The post-war change in population, and the following years of communist rule, was a period in which Svitavy didn’t like to look back and remember the town’s past glory. Apart from the square, perhaps the most precious historical landmark is the Ottendorfer Library, a testament to the incredible life journey of Valentin Oswald Ottendorfer, who was born here in 1829.

“As a student, he fought on Prague’s barricades in 1848. His participation in the democratic life of students in Prague and Vienna made him leave for the United States. His beginnings were tough but he eventually became a journalist and married the widow of the most important German-language newspapers in the United States, the Staats-Zeintung. That brought him enough money to be able to start a number of philanthropic projects, both in the US and in Svitavy. He built a hospital, an orphanage and a poor house in his home town, as well as a library and reading room.”

Another self-made man from Svitavy was Oskar Schindler. In 1944, he moved nearly 1,200 Jewish prisoners from the Auschwitz concentration camp to his factory south of Svitavy, saving them from extermination. The town only began to appreciate him after the fall of communism – and after the 1993 film Schindler’s List. Daniel Lupton again.

“Yes, I did know about Oskar Schindler. In fact, I use it as the hook to introduce my friends to Svitavy. ‘Where is that?’ ‘Well, have you ever seen the movie Schindler’s List?’ ‘Oh, yeah.’ ‘Well, that all happened in or near Svitavy. Oskar Schindler grew up in Svitavy.’ So when I have American friends come, we show them the house that Schindler grew up in, we take them to the museum where there is an Oskar Schindler exhibit, we show them the monument in the park, which is just a few meters from our flat, and I even take them south of here to the factory.”

Oskar Schindler's monument The monument to Oskar Schindler in Svitavy was erected in 1994, fifty years after the life-saving jouney. Although he had a controversial personality and was an unscrupulous businessman, Radoslav Fikejz from the municipal museum says the town is certainly proud of what he did.

“The town of Svitavy does not commemorate Oskar Schindler as a person, but rather his deed – saving 1,200 human lives. For us, he remains a saviour, someone who did a great thing during the Holocaust, something that does not often happen in history. Schindler himself, as one of the Jews he saved said, had several personalities in one.”

Fabrika After the fall of communism, the town had to face a break-up of the industrial giants created after the war with many of the old factories having to close down. But this year, a part of a large factory compound built in the 1920s right next to the town square was converted into Fabrika – a multi-purpose cultural centre. Its director Petr Mohr says the town took advantage of the new possibilities from the EU.

“The original reason why the town decided to go ahead with this was that we were looking for a new place for the library. At first, we wanted to have a new building erected in the centre of the town, but then we found out about possible funding from the European Union. And this old textile factory met all the conditions.”

Fabrika Apart from the library, the four-storey building has a concert hall, meeting rooms, an internet café, and other facilities. Although some people say the investment of some 200 million crowns, or nearly 10 million US dollars, was far too big, its director argues that Fabrika will be there for future generations, making the town more enjoyable to live in. For Daniel Lupton, living in Svitavy is great already.

“There are a lot of things to like about Svitavy. It’s a perfect size. It’s not a little village, and it’s not Prague, it doesn’t have a million people, it’s small enough. Whenever I go into town, I see people I know and I’m greeted, and it’s large enough that I can find almost anything I want here. It’s a wonderful place to raise a family. The city is nice, and yet within walking distance I can be out in nature, in the hills and the forests. It’s a lovely place to be.”

The episode featured today was first broadcast on December 10, 2008. 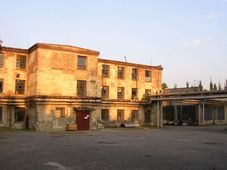 Thanks to Steven Spielberg, the story of Oskar Schindler and the twelve hundred Jews he saved during World War II is well known. But… 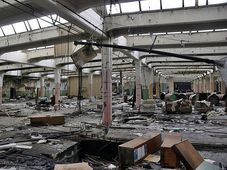 The former factory in the small east-Bohemian town of Brněnec, where Oskar Schindler saved 1,200 Jews from the Nazi Holocaust, has…

Svitavy – the birthplace of Oskar Schindler

You are not very likely to wander into Svitavy by chance. Located on both the major road and railway line connecting Moravia and eastern…