The Sázava Monastery, which shares its name with the town and river Sázava, was declared a national cultural monument in 1962 by the Czechoslovak state. It is one of the oldest and best preserved monasteries in all of Bohemia. It is also important as an early cultural bridge between the eastern and western branches of the church and because of its use of the Old Slavonic, the first written Slavic language.

I spoke with Slávka Matoušová in her office inside the walls of the monastery.

"My job is Director of Monastery of Sázava or Monastery of St Procopius. I was a guide here since 1988 and now I am the director."

The St Procopius she referred to there is one of the Czech patron saints.

"He was a hermit, a priest in the Old Slavonic language, a Benedictine monk and he lived here until the end of the 11th century. But in 1204 Pope Innocent III in Rome declared Procopius a saint because of his life and because of his miracles."

One of his best known miracles relates to the founding of the Sázava Monastery. As a hermit Procopius lived alone in a cave under the site of today's monastery. It was here at this cave that Procopius met Prince Ulrich and gained his trust and patronage.

"Prince Ulrich was a prince of the tribe of Premyslids. They were the first kings of the Czech state Bohemia. He was a very passionate hunter and one day he was hunting in this wild forest and he met Procopius. The prince was very thirsty and he asked Procopius for some water. Procopius gave him some water in a wooden cup. But a miracle! Water changed into wine. And Prince Ulrich helped Procopius found the first Old Slavonic Benedictine monastery in Bohemia."

Sázava Monastery grew over the centuries to include a variety of architectural styles, ranging from the 11th century foundations to Gothic towers and Baroque interiors. There is even a series of Romanesque columns and arches that was once the beginning of a grand cathedral that stands incomplete today, after the Hussite religious wars interrupted construction in 1421. But the most valuable part of the monastery is the Chapter Hall which originally served as a meeting room for the monks' morning prayers. Monastery director Slávka Matoušová continues.

"The Chapter Hall is one of the nicest gothic halls in Bohemia. You can see very nice paintings of the 13th century. They celebrate the motherhood of Our Lady Mary."

These murals were superbly restored in the 20th century after nearly being destroyed when the monastery fell into the hands of private owners who used the buildings as living quarters a century before.

"In the 19th century the monastery was abolished by Austrian Emperor Joseph II. The new owners used the Chapter Hall as a cellar and all the walls were white washed. But between the First and Second World Wars a Benedictine priest in Sázava, Father Klement, started to restore the Gothic paintings. And now our visitors can see them in their full beauty."

Another interesting piece of art at Sázava monastery is a large and imposing painting. They say it has been at the center of a series of miracles dating back to the mid 17th century. Joseph II. "One of the most interesting pictures in Sázava is a picture of the face St Procopius in the Church of St Procopius. From legends we know this picture was found in the ruins of the church after the Hussite attacks. Procopius has his eyes shut in the picture, but sometimes the eyes of Procopius are open. The first time was half way through the 17th century when people said Procopius opened his eyes. I can say that this year in July Procopius opened his eyes again. I think it is a miracle."

The sounds of bells echo across the town of Sázava from the lofty Gothic bell tower. For almost a thousand years the bells have been a source of local pride. Legend has it that the first bells at Sázava Monastery date from the 11th century. But those bells are gone forever, swept away by history and only recently replaced, through an act of generosity.

"A lot of bells in Bohemia were taken away during the First and Second World Wars. But now in the Gothic tower we have three bells. They have names, St Wenceslas, St Ludmila and St Procopius, Czech patrons. They are from 1992. I think it is very nice that one man, Mr. Kral, from Sázava, collected about 1,000,000 crowns over two years. Because of him we have, again after the Second World War, three bells."

After guided tours of the monastery visitors are often seen staring up at the walls of the bell tower mesmerized. After some time they move around the tower for a different view and continue staring. Before I left Sázava Monastery Slávka Matoušová explained the strange ritual.

"If you find on the sides of our Gothic tower three stars from carved red stone, you wish one deepest wish in your life, and your wish will be fulfilled."

The episode featured today was first broadcast on October 4, 2006. 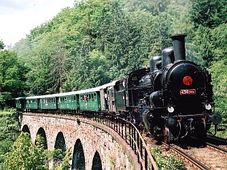 434.2186 is the number of a famous historic locomotive that has appeared in countless Czech films including "Páni Kluci" about Tom…

434.2186 is the number of a famous historic locomotive that has appeared in countless Czech films including "Pani Kluci" about Tom…

The Sazava Monastery, which shares its name with the town and river Sazava, was declared a national cultural monument in 1962 by the…