Landstejn Castle, Czech Canada, & the tunnels beneath the Renaissance town of Slavonice

Southeast Bohemia's Landstejn Castle found south-east of Jindrichuv Hradec, close to the Czech - Moravian - Austrian border, remains one of the Czech Republic's most imposing structures. The famous Romanesque ruin, originally designed to protect Bohemia's frontiers as well as to guard an ancient trade route to Austria, was built in the early 13th century.

The view of Landstejn Castle is simply gorgeous on what is a breezy summer's day; and not surprisingly the weather has brought out many visiting tourists, not least a drove of mountain bikers who lock up their bikes of glinting aluminium and steel as they prepare to visit the castle. I take a moment to ask one of the riders - named Vlastik - how he finds Czech Canada's terrain.

"This is a beautiful area: Czech Canada. We come to one of the camps here every year. The cycle trails are in perfect condition, the historic sites are perfectly preserved, we really like it. We spend the week setting out from our base camp, and you can even leave the main trails for some rockier terrain, but you have to be careful not to do a face-plant anywhere! The main thing about Czech Canada is it's all up and down - first you have to claw your way up, then you ride down the other side freely. That's what it's all about."

Landstejn Castle Vlastik and his compatriots move on and I decide it's time I visited the castle grounds myself. For all of Czech Canada's wonders there is nothing quite comparable to this.

Landstejn is one of the biggest surviving castle complexes in the Czech lands, along with another famous ruin, Rabi. Like most castles on the border it had something of a turbulent history - coming under many owners throughout the years. Records show that throughout its long history, the most important owners were the Vitkov family, in particular Vilem of Landstejn, who was a contemporary of Holy Roman Emperor and Czech King Charles IV.

How would one characterise Landstejn Castle? Its oldest section is Romanesque in design and contains an interior palace and part of a massive surviving tower which once stretched 34 metres in height. The impression is of an enormous fortress: so many giant blocks rising on a small promontory that appears almost out of nowhere in the middle of the woods.

Landstejn Castle Landstejn is surrounded by several levels of ramparts that make it imposing indeed and a walk through its passageways and courtyards will remain a memorable part of your journey. Inside rewards include walking through former halls of glory and especially seeing the rising tower itself. Plus, you certainly won't want what remains of the Chapel of St. George.

As I wander around the grounds I soon hear the twang of a bow of an unknown archer. Castles like Landstejn regularly offer services that let you try a hand at the bow, cross-bow, or throwing axe.

"Hello. My name is Michal Snajdar. I've been working here at Landstejn every summer for the last four years. I like it, and as far as summer work is concerned I really enjoy teaching people to shoot. If you try this bow you have to draw it back like so and aim here, you have to hold it straight. This bow is one of our most difficult - some people have failed to draw the string. But, once you do, it shoots very straight."

Eventually I try my hand at the throwing axe and get it right. Die, you wild charging boar disguised as a tree stump! You haven't fooled me. 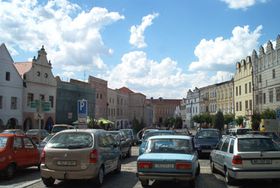 Slavonice The whole experience is invigorating - and to think we haven't even reached the nearby town of Slavonice yet.

In the hey-day of Landstejn, long before the castle burned after being struck by lightning, the beautiful renaissance town of Slavonice was important as well as rich - something still apparent even now. Without a doubt it features one of the most beautiful squares of any town in the country - a fair challenge even to the famous and somewhat more well-known square in Telc. Gems on the city's main square include rows of small houses with original s-graffiti as well as newer Baroque elements on some that make some of the houses look like wedding cakes bravely withstanding the summer sun.

Amazing to think that soon we will be going underground: that's right for "adventurers" Slavonice offers a tour that will take you right under its beautiful square, a tour through original Gothic cellars that were later joined by tunnels, painfully dug out to draw away underground water. These tunnels were not meant for crawling around in - or if they were - by smaller figures of medieval times. As you prepare for the tour you will be given a pair of massive waist high galoshes, a raincoat, and, if you have a bit extra around the waist will be pre-measured to make sure you can make it through. And of course it's not for the claustrophobic. You'll soon be wishing you were skinny as Golem as find yourself winding through dark, muddy passageways that stretch for a hundred metres or more, water sloshing over your feet.

Over the last five years how many people have you taken through the tunnels?

Oh, that's a lot. Tell us a little bit about the purpose of the tunnels...

Slavonice's underground "It's a system which drains water out of the town; it was just for the water, not a strategic route. The tunnels are about a kilometre in length, though not all have been cleaned or opened up to tourists."

Okay, what is specific about the tour itself? There are a few tight turns, hence the warning "not for people with claustrophobia".

"Yes, these tunnels are indeed tiny, among the tiniest in Europe. The narrowest point is about 120 centimetres tall and 60 centimetres wide. It definitely isn't for people who suffer from claustrophobia, who have back, leg, heart, brain, lung problems (laughs)."

Of course when you go down you have to have special clothing... generally would you say that there is an interest among tourists especially on a hot day like today?

"Definitely, when it's hot like now people want to go down there to escape. And of course there's an interest because most people can't imagine what those tunnels are like." 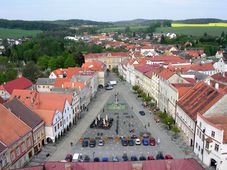 The south Bohemian town of Slavonice, which is known mainly for its uniquely preserved Gothic and Renaissance town houses, has been… 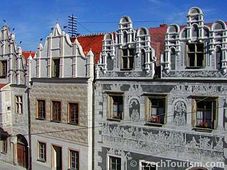 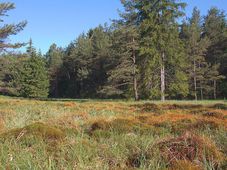 Czech Canada is the name of an area in south-eastern Bohemia within the Jindřichův Hradec region. Spanning around 250 square kilometres,…