With the arrival of spring in the Czech Republic the tourist season is beginning to slowly re-awaken and with it a favourite Czech pastime - visiting the country's many castles and chateaux with family and friends. In that spirit today we visit the royal castle of Krivoklat - a most remarkable site with a history that stretches back to the 12th century. Found on a promontory of rolling hills overlooking deep woodlands, Krivoklat was a favourite of King Wenceslas IV. He used it primarily for leisure and sport, preferring it to his father's more famous Karlstejn, located in the same region. Over the centuries Krivoklat then served as bastion as well as prison; as fans of the esoteric will know even famous English alchemist Edward Kelley was imprisoned there, breaking his leg in a botched escape. Certainly, Krivoklat never easily released its own. Their histories continue to pervade the site going back hundreds of years.

Krivoklat, photo: CzechTourism Our tour today begins with a set of jangled keys - keys belonging to Petr Triska, a highly experienced guide who knows this castle inside and out. He's agreed to show me some of Krivoklat's famous rooms and to tell me a bit about the castle's historic glory.

"Welcome to Krivoklat Castle, if you would like to get in we are ready and the old Gothic Castle is ready too."

Now it's just a few steps to the 2nd castle courtyard, and Petr Triska begins telling me about the site. For instance, he explains it was originally not made of stone at all, but wood. Alas the footprint of the original site lay elsewhere and has never been found.

"The origin of this castle is one thousand years ago, but originally it was a wooden castle found somewhere in the forest. Its original position remains unknown, that's one of the secrets of this place. The first stone castle was then built in the 13th century during the rule of Premysl Otakar II. Since that time it had been used as the summer seat for royalty. The Luxemburgs used the castle next but John the Blind spent too much time fighting somewhere in Europe to make much use of it. On the other hand his son Charles IV was imprisoned here for a year under 'house arrest' for fear he might be kidnapped by the Czech nobility." 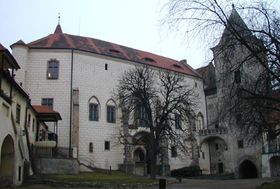 Courtyard, photo: Archive of Radio Prague That is one reason perhaps why Charles IV - the greatest of Bohemia's future kings - developed an aversion for Krivoklat at an early age, an aversion which may have inspired him to found another royal castle that bears his name when he became king. That was called Karlstejn, found nearby. Still, aversion felt by the father in this case was not shared by the son:

"For Krivoklat Castle the reign of Wenceslas IV was the golden period because he was a hunter. All his leisure time as king he spent in this place or in Tocnik, hunting wild boars, rams, stags, and other animals."

In this area, it's true, there is a very specific geography, it's very hilly, very long shadows, you can almost see the stag leaping off the mount!

"There are several kinds of different nature, it's a natural reservation of the Czech Republic, asked by UNESCO to be saved as a natural treasure. This area is so beautiful that everyone would like to spend time here. I have been living here for fifteen years and I love this country!" 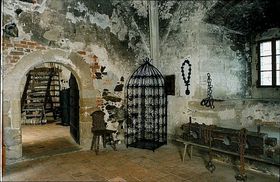 Prison, photo: CzechTourism Krivoklat, with its massive ramparts many metres thick, and high tower, dominates the local landscape, a landscape cut by a curving brook and a quiet little village below. Amazingly, when you take the train through the countryside the castle deceptively disappears sleepily round the first bend. Lying well off the nearest larger waterway, the Berounka River, meant that Krivoklat was never attacked in battle - not even during the Hussite wars when Jan Zizka's army missed it completely on its way to sack Prague. The soldiers were probably better off for their mistake: had they ever tried to take Krivoklat by force they would have faced by a formidable defence. 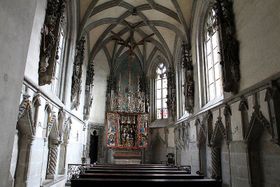 Royal chapel, photo: Ondřej Kořínek, CC BY-SA 3.0 Unported But now Krivoklat's interior beckons on this sunny day: in a set of two official tours visitors to the castle can view everything from original dungeons were unlucky prisoners were kept, dungeons now filled with mock-ups of original torture instruments - to tours of the tower which include exhibits from the hunt, including a collection of poacher's guns designed to appear like walking sticks. The most interesting to my mind, though were the royal chapel and the Great Hall, both examples of exquisite Gothic interiors. Looking into the chapel, where only royalty or nobility were allowed: the 15th century altar of the Virgin Mary. She does not face forward but to the right, where the Czech kings actually used to sit.

"She is not looking to the centre, she was looking to the right side, where the king sat with his family. The nobility sat on the sides of the chapel. For simple people, meanwhile, there was no way in." 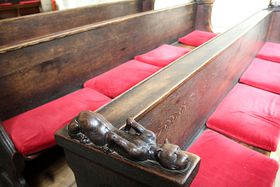 Carving, photo: Ondřej Kořínek, CC BY-SA 3.0 Unported But even nobility were deemed sinners when they entered the chapel, as displayed by fascinating carvings decorating the pews: little homunculus beasts - "evil" bowing down before God.

Finally, we leave you with one last impression of Krivoklat Castle this day - just a final touch to wet your appetite - the Great Hall - by far the most exciting chamber in the castle over all, featuring exquisite Gothic ribbing and an atmosphere in which one could practically see kings receive their audiences centuries ago. A throne; restored remnants of frescoes on the wall; a Gothic wooden Madonna. Testimony of royal lives gone past, lost in the dust now, but unforgotten in the halls of an exquisite castle, hidden in the forest and hills. Great Hall, photo: Archive of Křivoklát castle "Now we are standing in the centre of the Royal Hall and it's the second-largest late Gothic Hall in central Europe. If I was talking about the chapel as the 'pearl' of the castle, this is the 'heart'. And, because this is the royal hall there has to be a throne, although this is just a replica. The throne was in the corner during audience with the king, and it is like meetings with the manager today who stands with his back to the light! It was psychological design on the part of the king that you couldn't see into his face. You couldn't see into the face of the king, because he was something more. Not God, but certainly not a normal man!" 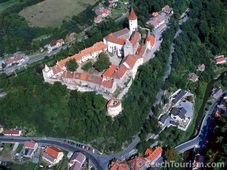 With football the name of the game -even elephants are playing it at Prague's Troja Zoo. A Czech claims to have built the biggest…