In this week's Spotlight we visit the recently rebuilt Ctenice Chateau, which has just been re-opened to the public. Located next to a pond, park, and forest on the outskirts of Prague, only a fifteen-minute bus-ride separates residents in the city from this beautiful recreational spot.

Ctenice Chateau, photo: www.praha-vinor.cz Vaclav Novotny, the Director of the Prague Information Service, took us around the chateau:

"The Chateau itself was built in the 14th century and had a number of owners. Its most important owner was the Wallenstein family. During their time, the building was built into Renaissance style. At the turn of the nineteenth century, it was rebuilt again under the Windischgratz family and the appearance it has today is from that time, the last rebuilding phase of 1802."

This Chateau is obviously not just an attractive recreational spot for Czechs, who want to know more about their history...

"Yes, we would also like foreign tourists to come here and have therefore prepared a permanent exhibition on the Habsburgs of the nineteenth century, which we find to be quite an important period of our history. The exhibition is not on show anywhere else in Prague. But it is not the only exhibition here. Two other buildings are housing a collection of nineteen coaches from various Czech museums and the archbishopric of Prague."

"The coaches are from four museums - the Post Museum, Municipal Museum of Prague, the Agriculture Museum, and the Technical Museum, and there are three more coaches from the archbishopric. The goal is to present different types of coaches from the simplest to the most prestigious. The most valuable is the Archbishop Coach dating from 1720 [also featured in the film Amadeus]. This is the most comprehensive collection of coaches in the Czech Republic." 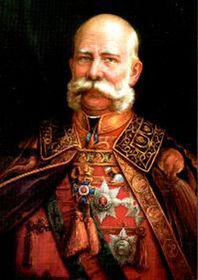 Emperor Franz Josef What about the permanent exhibition that has just been opened?

"We didn't just want to show the Habsburgs themselves but the reception of the Habsburgs by the Czech society in the nineteenth century. There are exhibits on the first pro-Habsburg revolution, a section on the Austro-Hungarian Army, another on the coronation of Franz Josef, who promised to be crowned as a Czech king but later refused to do so. There is also a section on Sissy [Elisabeth], and another on the mistress of the Emperor [Franz Josef]. There is also an exhibition of music because the Habsburgs were known to be very fond of music; there are exhibits on Haydn and the Austrian national anthem."

How were the Czech lands affected by being part of the Austro-Hungarian empire and under the monarchy. What do we see today that we know has come from that period?

Ctenice Chateau, photo: www.praha-vinor.cz "I think the roots of almost everything have come from that period - the state, law, and transportation systems, as well as trains, streets, churches and the cuisine as well. We have almost the same cuisine and the same habits. The question is whether we were affected by the Habsburgs or whether the Habsburgs were affected by Czech society. The fact is that we were in one state with the Austrians for three hundred years and we have many similarities."

Someone who came to see the chateau told me that one of her relatives still talks about the day she received a coin from Franz Josef and that Czechs still have great memories of that time. How does the exhibition show us what they really thought of the monarchy?

Ctenice Chateau, photo: www.praha-vinor.cz "The portraits of the Habsburgs are on various plain objects like cups, plates, and pipes. Those were normal things that were normally used in people's day-to-day lives, which indicates that Czechs were buying and using these things, which from today's point of view is unusual. If they didn't accept the Habsburgs, they wouldn't have bought the things because nobody forced them to do so. I don't know of any pipe, for example, that bears the portrait of the president today."

As you walk into the courtyard of the chateau you find a café, the various exhibitions...

"In the first two months there are going to be guided tours in Czech and other languages. In that time, we will prepare programmes for ear phones [pre-recorded tours on headsets] in several languages because it is cheaper to have ear phones than guides. We think visitors need to spend at least half a day here because, after viewing the exhibitions, they can take walks in the park, around the pond, and through the woods, and then have a nice coffee here. So they will need at least half a day."