The summer months are here and with it tourists visiting many of the country’s most notable castles and chateaux. But one site you might want to consider visiting, somewhat off the beaten path, is Blatná Castle in southern Bohemia, some 95 kilometres south of the capital. It’s not an understatement to say Blatná Castle is something out of a fairly tale, overlooking a surrounding moat and deer park. Blatná is the location we visit in Spotlight today. 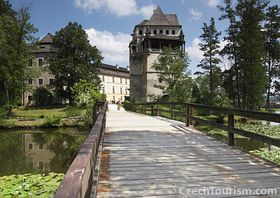 Blatná Castle, photo: CzechTourism The first mention of the castle dates back to 1235 when it was probably little more than a wooden hill fort: through the centuries it was renovated into a classic stone chateau, transformed in the Renaissance and later Neo-Gothic styles. The first owners were lords from Rožmitál, the last, the noble Hildprandts, who bought the castle in 1798. They lost the property for some 40 years after being forced out by the Communists and it was only in 1992 that the castle and surrounding lands were returned. Jana Germenis, one of the co-owners today, was a little girl when her family was forced out in 1953:

“Of course the days when we were put out, I was about four or five were very hard. When I was a child we lived in a village which was about ten kilometers from here. But the locals were very nice. Of course, as a good human being you forget the bad things.” 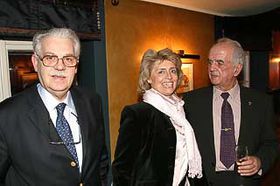 Jana Germenis Eventually, the family relocated to Ethiopia: Jana Germenis’ grandparents had already left earlier - in 1948 - and her parents followed roughly a decade later, when they were given permission at last to leave.

“My grandfather from my mother’s side had been Czechoslovak ambassador to the League of Nations in Washington DC. In 1936 he met the Ethiopian Emperor Hailie Selassie who gave a speech there asking for help against the Italian occupation. They met, because Czechoslovakia supported Ethiopia, and he asked ‘Why don’t you come one day to Ethiopia?

“So in ’48 when they escaped they went to Ethiopia and then they asked for his daughter, my mother, and us to come out. He visited Karlovy Vary twice to go to the spas and asked the Czechoslovak president to allow us to leave, which we finally did in 1959. We lived in Adis Abeba 2,500 metres above sea level and you really feel it when you run or do anything, but the climate was beautiful as well as the green landscape.”

“It was wonderful and Africa brought something new. Those were some of the best years that we had, like a fairy tale when the emperor was alive.”

But of course, memories of Czechoslovakia lingered; there was especially a longing on the part of her parents:

“My father used to drive – when we used to visit Europe from Ethiopia – he used to drive to the German or Austrian border and say ‘one day I will go back’. That was always his wish. He was allowed to come back once or twice. The older generation always believed they would return. He was always saying they would come home one day. For us children it was easier. My parents had to leave with one suitcase and go from the home. I myself never believed it. Very few friends of mine knew that I could be an owner of such a property. So when it came afterwards they were sort of upset, saying ‘why didn’t you tell us, and that you were a baroness, and so on’. I really thought that we’d never get it back.” 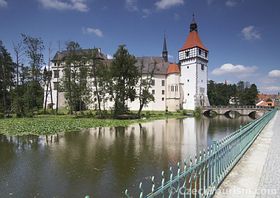 Blatná Castle, photo: CzechTourism In the 1990s Jana Germenis, her mother (today 92) and the Hildprandt family strived to restore Blatná Castle, cooperating with the culture ministry and others to renovate the property, no easy undertaking which continues today. Most of the castle has been restored including its tower and most of the facades and unique timbering. The interiors are open to the public, with many of the original furnishings: settees, writing tables, an intact family library. Jana Germenis was kind enough to show me around.

Then, the trophy hunting room:

“This is our hunting room which is quite famous. These are of course deer that were shot mostly by my grandfather and some by my father. They were great hunters both of them.”

RP: Do you yourself hunt?

“No, no, never! I am not a hunter. In our park here we have some 60 Fallow deer. They are such darlings that they eat from your hand. They are a great attraction for the tourists.”

RP: What about this bear here? Is there any family legend that goes with it?

And of course, there is no way one should miss a visit to the castle tower itself with gorgeous wall paintings colorful as if they were painted yesterday.

“This was done in 1348 I think and has never needed to be repaired or renovated: they have only been washed. These paintings were done by an Italian painter.”

RP: Are they all biblical motifs?

“That’s right: you see St Barbara there, for example, or Adam and Eve. Legend has it that the shell over Adam and Eve, by the way, hides a treasure or fortune.

I didn’t find it if there was but then many would agree Blatná Castle alone is probably treasure enough. It doesn’t take long to view and is ideal for a quick stop while touring south Bohemia. Just be sure to leave ample time to pet some of the miniature fallow deer in the surrounding park.

“I am from southern Bohemia I really do think this is the nicest part of the Czech Republic! You have everything here: lakes, greenery, and more. A beautiful country.” 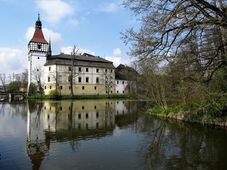 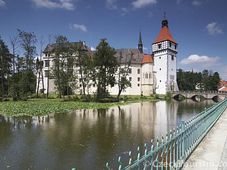 The summer months are here and with it tourists visiting many of the country’s most notable castles and chateaux. But one site you…