A Mexican eatery, a trendy pub: two places to enjoy in Prague's Dejvice district on your next visit

In Spotlight last time we looked at a special little cafe in Dejvice in Prague 6, a picturesque part of the city that includes many leafy lanes, quiet walks, and villa districts, close to the city's famous Stromovka park and accessible from the Dejvice and Hradcanska metro stations. This week we complete our look at Prague 6 hang-out spots you might want to visit, either on your way from the Castle, or on your way to Stromovka park. One is a fast-food eatery specialising in Mexican fast food, something that is not nearly as common in Prague as you might expect - usually fast food here stops at hamburgers, hot-dogs, or pizza. The other site is a successful pub that is part of a franchise that caters to a somewhat glitzier crowd. You can go there to get good beer, quality traditional Czech food, and great seats to observe people in the latest trendy clothes, flashing the newest silvery model of cell phone, all having a good time. Mexican eatery, trendy pub, both ahead in today's Spotlight. 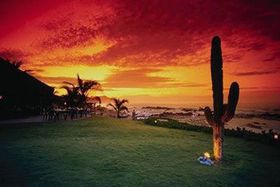 So, I'm standing at the counter in this fine establishment called Taco Loco, which is near the Hradcanska metro, and across from me is Mr Karel Sklenar, who works here. It's not very typical for Prague, to have this kind of establishment, where you can get fast Mexican food on the spot...

"Here's how it occurred to me -I've got a friend who has lived in Mexico for thirty years or so, and now that he comes back to visit, we considered going into business together, and wondered what kind of business it could be. It came to us that this kind of thing doesn't really work in Prague, certainly not like in Mexico..."

I spent some time in New York City - these kind of little restaurants where you have only a couple tables, or you can sit by the window or counter, they are very popular. Some of them are even famous...

"Yes, well, Czechs are getting used to the idea too, although it's still a bit unusual - they're beginning to like it and return regularly. One of the main reasons we started it, is also because we know there are a lot of foreigners in Prague. Americans immediately caught on and started coming. Czechs are catching on too."

Let me ask you this - did you yourself invest in this business?

How long have you been open now?

"Since October - so basically four and a half months. At the start it looked easy, but, having got help from an advisor from the Mexican embassy we saw there were still things that could be improved on. Now, we are getting closer and closer to the way the food would be in Mexico and it's better."

Tell me a little bit about the restaurant itself: what were some of the things that were needed in order to get the operation off the ground?

"The first thing we had to do was to install proper ventilation; then, we had to create a proper space for preparing the food, the vegetables, and meat marinades, then to set up the counter here, where you can choose from all the ingredients, which are cooled. Then, the grill on which I make all the food, and of course it was a necessity to secure a supplier, because many ingredients are imported... Luckily that situation has only got better. And finally, you have to have a lot of faith the whole thing will work!"

"What we offer: we offer everything that belongs to Mexican fast food. The basics are always vegetables: beans, paprika peppers, then kinds of squash, today I'm using egg plant, corn. Then of course there's the marinated meat - bacon, chicken, beef. We have home-made "chorizo", which is a kind of minced klobasa sausage mix. Then we use various cheeses, cheddar, or the white cheese Ackawi, which is similar to salty white Mexican cheese. Then of course we use various salsas, some of which have to be imported, such as tomatioso, which used special Mexican tomatoes you can't get here in Europe. Last but not least, we use chilli peppers to produce a salsa that is properly spicy, the way it should be..."

What about this over here? It looks like you have mushrooms in some kind of marinade....

I can see from the menu here that I can choose among burritos, enchiladas - chimichanga - what is that?

"Chimichanga... that's kind of like a burrito, a kind of stiffer pancake filled mainly with cheese... These are all basic dishes in Mexican cuisine."

Were you in Mexico yourself?

"I'm sorry to say I wasn't in Mexico. I'm afraid of flying, so even my friend whose been trying to get me there for years but was unable to persuade me! He wasn't able to get me into the plane! That's my biggest problem!"

Okay, because I've never had 'chimichanga' I think I'll order that...

So, I'm with a customer and, evidently it's not your first time here...

"That's right, yeah. I come here about once a week, it's great food, and there's great atmosphere, and I love it here. The best part is that you can watch it, when he prepares it. Every burrito is different, basically, he always makes it to your own taste."

Well, it does look fantastic... What is your favourite food here?

Amazing a tiny little restaurant, just a few metres wide, basic except for a few pictures of satisfied customers tucking into Mexican food, a few stools, a table with metal chairs, a rack where you borrow the paper while Mr Sklenar prepares your food, but quaint nevertheless: While every north American city must have dozens of such places, and while Prague has other on-the-corner fast-food joints, this little shop is set apart by its owner's obvious elan to his work, and his ability to communicate with customers as they chose their food. If you choose to take away you'll get your burrito in silver foil, and a variety of dips in little plastic baggies.

But it's also possible that fast food's not your thing, and that you're looking for something more traditional - hearty Czech food at a reasonable price and above all tasty Czech beer. In that case "Potrefena Husa' may be just the place for you. Designed for a more demanding, more stylish clientele, all six Potrefena Husa pubs, including the one in Dejvice contain the same or similar stylish elements, including beer bottles from leading Prague breweries, displayed in original ways: behind glass cases or here literally hundreds hung from the ceiling creating an unusual reflective glass surface. Bare TV tubes used as a design element, rather than for actual viewing, also line the back of the long stretch bar. I spoke with Potrefena Husa's manager in Dejvice Kvetoslav Jerabek, about his pub and its success, beginning by asking when it was the first Potrefena Husa - which translated literally means "The Shot Goose', first appeared:

"The first Potrefena Husa opened three years ago as part of a joint project of Prague breweries, in the aim to create a new chain on the basis of a franchise - at present there are now six of our restaurants throughout the country."

What about the name 'Potrefena Husa' ? What can you tell me about the meaning of the name?

"That's a little bit of a mystery. From the very beginning most of us were unable to find out who originally came up with the name - meaning The Shot Goose. It's not to be meant to be morbid in any way - according to a saying "That a shot goose always makes itself heard."

Could you tell me a little bit about the characteristics of the restaurant that are important?

"The basic concept was thought up by architect Vaclav Cervenka. Basic elements of the interior are: a long bar in grey, which symbolises, in its way, "the city", the concrete we are surrounded by. You'll notice too the goose footprints embedded in parts of the bar... All the Potrefena Husas have large windows so that people can see both out, and be seen, and typical is also for one side to have high tables and high chairs, while another has lower, more intimate seating."

Large windows is an element not to be underestimated: this fine restaurant wants you to be seen inside, having a good time, to attract others, and truly it is a strong selling point: whenever I go by and see people inside enjoying themselves it makes me wonder why I am not there myself! Some of the specialities of the restaurant include Czech meals like roast pork, goulash or even soups that are served not in your classic bowl, but in a round hollowed out loaf of bread - which is a treat indeed.

That rounds out our 2-part look at one cafe, one fast food eatery, and a new line of Czech pub: cheers and be sure to enjoy yourself when you come to Prague! 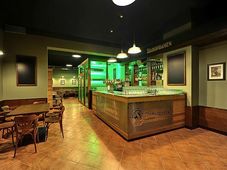 After the success of its Potrefená husa chain, the Prague-based Staropramen brewery is planning a new network of restaurants under…