In today's Spotlight, we take a tour of the Small Fortress of Terezin in North Bohemia, which - together with the Large Fortress, a kilometre away - was built to defend Bohemia against the Prussian Army. But the fortresses were never used in battle and the Small Fortress was used as an army prison and a prison for political prisoners. However, it is mainly known from the period from 1940-1945, when it was a Nazi German Gestapo prison.

"My name is Kamila and I'm a guide at the memorial. Right now we are at the Small Fortress. The first prisoners came here in June 1940 and then 32,000 inmates including 5,000 women passed through this prison during WWII and about 2,600 people died here. The Small Fortress was a police prison and people were imprisoned here mainly for political reasons. This means that people who were in the resistance were here... people who fought against the Nazi regime. They also came from other countries - from Germany, Holland, and also from Russia."

Okay, where are we right now? We just walked through a gate...

"Yes, we are now in the administration yard. People who were brought to this prison had to come here first and wait in lines for several hours. In this yard, there's also the office of the highest commandant Heinrich Jekel, who was very cruel not only to prisoners but also to the guards and he was responsible for a brutal regime in the Small Fortress. This is why the Small Fortress was among the most feared prisons in our country."

And as we're walking through a gate which says 'Arbeit Macht Frei'...

"...work makes you free. This slogan was usually on the gates of concentration camps. The Small Fortress is the only prison with this slogan."

Could you tell us a little bit about what the prisoners went through, what kind of work they had to do?

"They worked in the prison - in the garden, kitchen, the canteen, the offices, and in various workshops. Some prisoners also worked outside at German companies near Terezin, or in agriculture. A big group of prisoners also worked in underground factories, which are five kilometres away and produced motor parts for military vehicles."

These former factories, I believe, cannot be visited...

"Yes, they are closed but now there are some people who are trying to open them again because somebody thought not only motor parts were produced there but also parts for the German V1 and V2 bombs. But that isn't official."

Apparently, that is why they thought there was also radioactive material there...

"...group cells and solitary confinements, the bathroom, and the sick room..."

We're now walking into one of the cells with the number nine.

"It is a cell for the Jewish prisoners, which wasn't like the others."

So, the Jewish prisoners were separated from the rest, were they?

"Yes, they were separated. But they weren't here for racial reasons, like in the ghetto or in concentration camps but they were brought here as a punishment when they broke some rules in the ghetto. Some of them were also here for political reasons. But they were usually isolated from the non-Jewish prisoners and had worse conditions here than the others."

So we're inside the cell now...

"There aren't any beds, toilets or wash basins. The cell was empty and only some straw mattresses were on the floor. Usually twenty or thirty people were here and the maximum number was sixty prisoners. It was only for a few days but I think one night was bad enough. The cell is really small. I think some nine square metres."

And it has only one small barred window at the very top. So, they stayed a few nights?

We've now entered a room, which is looking quite terrifying.

"In this cell were prisoners of war from Russia who were also separated and had bad conditions. The cells had three-level plank beds, a table and benches. There was only one toilet. Imagine there were about fifty prisoners in each cell and at the end of the war there were one hundred prisoners for one toilet. Of course, in such crowded cells the prisoners couldn't protect themselves from lice and infestation."

"This gate was called 'the Gate of Death' by prisoners because those who passed through it never came back.'

Could you tell us a little bit about what life was like for the prisoners? At what time did they have to get up, how much food did they get to eat? 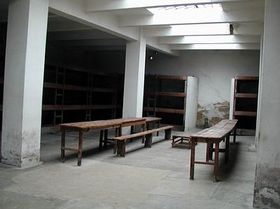 "Each prisoner got half a litre of coffee and a small piece or slice of bread. For lunch they had soup and in the evening as well. Sometimes there were some vegetables. But there were also times when Heinrich Jekel ordered to cook some special food, which had to contain everything that was in the packages sent to the prisoners from home. So it had sweet and salty foodstuff but also cigarettes, sowing needles, toothpaste, pencils, and the prisoners were forced to eat it. But thanks to the sweet and salty foodstuff, it was the most caloric food in this prison."

What was their daily routine like, were they able to have a shower?

"A lot of people think that the showers were gas chambers because some people said there were gas chambers in Terezin. But they never were here because it was not an extermination camp. Prisoners could take a shower every Saturday but of course it wasn't very hygienic because many prisoners had to shower at once - five under one shower. Sometimes, the guards would have pleasure in letting the water flow for only a short time. They then forced the prisoners out of the showers, even if they still had soap on them or weren't done. But the bathrooms had one advantage - prisoners met their friends and relatives, who were imprisoned in other cells.

"Now we are in the fourth yard and the cells were added in 1943, when the cells in the first yard started to be overcrowded. There were only two toilets, which were very often broken and excrements leaked onto the floor. Because of these bad conditions and the overcrowded cells, a typhoid fever epidemic spread. The Nazis didn't do anything to stop it from spreading and escaped on May 5th 1945. The Russians came on May 8th and doctors and nurses helped the sick prisoners. About 25,000 people were saved and could go home to 29 states around the world. Because of quarantine, the last prisoners did not leave Terezin till August 1945."