Prague “S” derby ends in stalemate but leaves Slavia on top; clean sheet for Vaclík at second-placed Sevilla; Plíšková drops out of Fed Cup final with injury; and history made as Spilková makes cut for LPGA Tour. 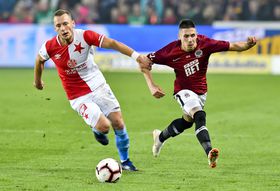 Vladimír Coufal (Slavia Prague), Srdjan Plavšič (Sparta Prague), photo: ČTK/Vít Šimánek With 14 rounds of the Czech football league played it’s still neck and neck at the top, with Slavia Prague only ahead of Viktoria Plzeň on goal difference. While Plzeň beat Baník Ostrava 1:0 in northern Moravia, Slavia only had to travel across town to take on Sparta in the latest edition of what is known as the “S” derby.

The visitors opened the scoring after 36 minutes but had conceded twice by half-time. However, mid-way through the second period, Slavia found the net again for the last goal of a game that ended 2:2.

Both of the league leaders’ goals came from corners – and set-pieces are a real chink in Sparta’s armour, says their Romanian midfielder Nicolae Stanciu.

“We controlled the game in the first half, we were better. When we spoke at half-time we felt that we would win the game. But again we conceded a goal from a standard situation and that changed everything. We receive a lot of goals from standard situations. I think last year when it was 3:3 in this game they scored once from a penalty and once from a corner – so we make the same mistake in every game.”

That result leaves Sparta in third place, seven points off the pace and tied with Zlín.

One-time Sparta player Tomáš Vaclík is doing well at Spain’s Sevilla. The 29-year-old goalkeeper kept a clean sheet in the club’s 0:0 draw with San Sebastian at the weekend, a result which leaves Sevilla – who Vaclík joined in the summer – second in La Liga.

Plíšková replaced by Krejčíková on Fed Cup team for final 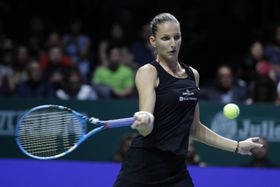 Karolína Plíšková, photo: ČTK/AP/Vincent Thian The Czech women’s team will be without star name Karolína Plíšková when they take on the USA in the final of tennis’s Fed Cup in Prague next weekend. The 26-year-old is suffering from calf muscle and wrist problems and has had to drop out. Her place will be taken by Barbora Krejčíková, who is number one in the WTA doubles rankings with partner Kateřina Siniaková. Also in the team taking on the Americans at the O2 Arena will be Czech number one Petra Kvitová, Siniaková and Barbora Strýcová. 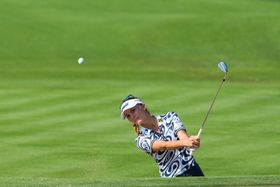 Klára Spilková, photo: archive of Klára Spilková The Czech Republic’s Klára Spilková has become the first player from her country to secure an LPGA Tour card. The 23-year-old made the cut for the 2019 season after coming fourth in a qualification tournament in Pinehurst, North Carolina at the weekend. Spilková was the first Czech player to win a Ladies European Tour event, at the Lalla Meryem Cup in Morocco, and represented the Czech Republic at the 2016 Olympics in Rio de Janeiro.