In Sports News on Monday: Slavia Prague fail to open up a four point gap in football’s league title race against Viktoria Plzeň; in the ice hockey world’s the Czechs are already in the quarter finals. And Germany wins again at the women’s under 17 European Championships. 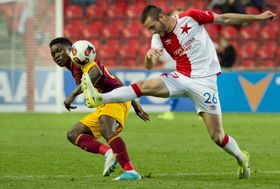 Slavia Prague - Dukla Prague: Emmanuel Edmond, Michael Lüfter, photo: CTK We start with football and the race for the Czech league title is still open with two league games to go. Slavia Prague had a massive chance to put the title within reach when they faced Dukla Prague on Saturday night. A win could have opened up a four point lead on second placed Viktoria Plzeň. Title holders Plzeň had only been able to tie 3:3 against Mladá Boleslav a day earlier. But in spite of twice taking the lead Dukla’s Nigeria Emmanuel Edmond equalized in the 79th minute leaving Slavia with just one point.

Slavia’s two remaining games are against fourth placed Mladá Boleslav and mid-table Brno. The last home game in what could be the title clincher will not be at their usual home ground due to a concert by the Rammstein band. 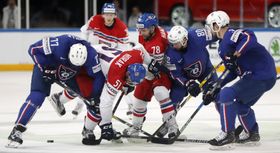 Czech Republic - France, photo: CTK In ice hockey, the Czech team won their fifth match in a row at the World Championships with a 5:2 victory against the co-hosts France. The Czechs have now booked their place in the quarter finals with the US, Sweden, or Russia all possible opponents. The Czechs had to wait until the ninth minute to take the lead against a French team that has embarrassed some of the favourites. Indeed the French had a series of chances in the first period and could have themselves taken the lead before the Czechs started to find the goal and gradually increased the lead.

"We have not conceded many goals. If you put aside the goal in the power play against Canada, then I think that our defensive game or the performance of the goal tender puts us up amongst the teams that have the meanest defence in the championships."

Indeed the Czech performance so far as regards opposition shots on goal is up there with Russia as the best in the tournament so far. 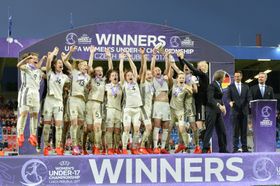 Winning German team, photo: CTK And finally back to football. The Czech Republic has been hosting the European women’s Under 17 championships since the start of the month. The finals at Plzeň produced little surprise with five times champions Germany facing up to three time winners, Spain. Both teams had earlier beaten the Czech Republic 5:1. And the two favourites could not be separated in a goalless normal time. Germany came out 3:1 winners on penalties.