In Sports News this Monday: No chance of fourth successive Fed Cup title for Czechs after defeat to US in semi-finals; Sparta beat Plzeň to hand Slavia advantage in title race; domestic football stunned by suicide of František Rajtoral; and Krpálek picks up first medal in heavyweight category.

Czechs out of Fed Cup after semi-final loss to US 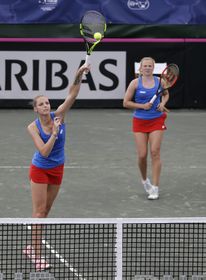 Kristýna Plíšková, Kateřina Siniaková, photo: CTK The Czech women’s tennis team cannot now win a fourth Fed Cup title in four years after defeat to the US in the semi-finals of the competition in Florida at the weekend. The Czechs had fielded a considerably weakened team but still forced the tie to the final, doubles rubber on Sunday. However, in the decider Kristýna Plíšková and Kateřina Siniaková were beaten 2-6 3-6 by CoCo Vandeweghe and Bethanie Mattek-Sands for the Czech women’s first Fed Cup loss since 2013.

Kristýna Plíšková, twin sister of world number three Karolína Plíšková, was taking part in the competition for the first time ever – and it was something of a baptism of fire.

“For me it was my first ever Fed Cup. And my first match was the decisive one. So everything was new and naturally I was a bit nervous. But it’s not so easy when you’ve been sitting the whole weekend and then go on for a tough doubles match against a pair who would be very difficult to beat, even if we played to our maximum. So it’s a disappointment for the whole team.”

Slavia in driving seat in championship after Plzeň lose at Sparta 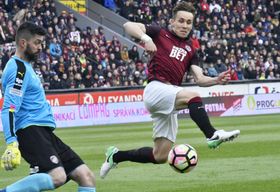 Sparta Prague - Viktoria Plzeň, photo: CTK The biggest game of the weekend in the domestic football league saw Sparta Prague overcome Viktoria Plzeň 2:0 in the capital, with Josef Šural and Vjačeslav Karavajev providing the goals. Sunday’s result plays into the hands of Slavia Prague, who are now two points clear of Plzeň after beating Slovácko 2:0 away. However Plzeň captain Roman Hubník says there is still all to play for in the title race.

“I wouldn’t say it was crucial result. There are still five rounds to go and we’ll see what happens in those games. Of course we have made things more complicated for ourselves. If Slavia win their remaining games they’ll be champions. But we also have five matches – we need to regroup and carry on.” 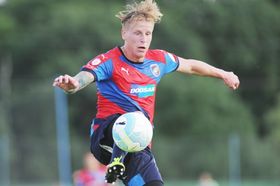 František Rajtoral, photo: CTK Off the field, there has been shock in the world of Czech football at the news that former Plzeň player František Rajtoral has died after committing suicide at the age of 31. He had been playing at the Turkish club Gaziantepspor since the start of the season. Rajtoral, who was a defender and holding midfielder, won the league four times with Plzeň and earned 14 caps for the Czech national team.

Olympic champion Lukáš Krpálek picked up a bronze at the European Judo Championships in Warsaw on Saturday. It was Krpálek’s first medal since moving up to the heavyweight category earlier this year.

Jaromír Jágr is set to become the sole owner of Kladno, the Czech club where he started his career. The NHL legend previously owned 70 percent of Kladno and local officials greenlit the sale of the remaining shares to him on Monday.