The two teams that have fought their way through to the final of the Extraliga hockey playoffs are defending champions Liberec who will face Kometa Brno. Both won their respective semi-final series 4:2, with Liberec ousting Chomutov and Brno defeating Hradec Králové.

NHL: Will Jágr stay with the Panthers? 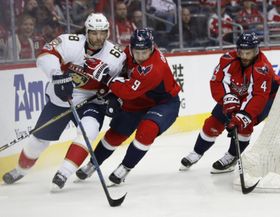 Jaromír Jágr (left), photo: CTK Hockey legend Jaromír Jágr picked up two assists in the Florida Panthers 3:0 win over the Buffalo Sabres on Saturday, the Panthers' second-last match of the season and last home game. The Panthers are out of playoff contention but won their very game of the season on Sunday against the league’s best team: the Washington Capitals. Jágr played but did not get on the scoreboard. Jágr, a pending free agent as of July 1, told the Sun Sentinel in a recent interview he "loved it with the Panthers", after saying throughout the season that he planned to continue playing hockey until 50 or 55. Negotiations on a new potential contract with Florida are to begin soon, now that the regular season has wrapped up.

Football midfielder Václav Pilař is eying a possible return to the sport with team Viktoria Plzeň after a long absence due to injury. Pilař, who suffered a long-term knee injury, could make an appearance on the pitch before the end of this season or start in the next, writes news site iDnes. The 28-year-old has a league title with Plzeň, spent two seasons in the Bundesliga and has 22 caps and five goals with the national team. He was one of the better players on the Czech squad at Euro 2012. České Budějovice - Karlovarsko, photo: CTK Kladno and České Budějovice face each other in the final of the men’s volleyball Extraliga, a repeat of their match-up in 2009. Both teams won their semi-final series in six matches. Kladno won the National Cup in February and therefore could pull off a “double”. The opening match of the series is on Saturday.