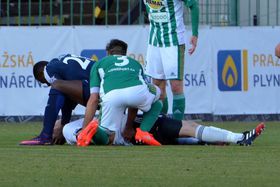 Francis Kone provides first aid to Martin Berkovec, photo: www.bohemians.cz/PJMl Slovácko’s Francis Kone was the hero of the weekend in Czech soccer’s top flight. The Togo striker was quick to react in a game at Bohemians 1905 on Saturday when the hosts’ goalkeeper Martin Berkovec clashed heads with his own defender Daniel Krch. Berkovec appeared unconscious and had swallowed his tongue – and Kone may have saved his life by quickly pulling it out.

After the game Berkovec passed along his thanks to Kone, while Bohemians manager Miroslav Koubek also expressed his gratitude at the post-game news conference.

“I would like to thank the Slovácko player Kone, who provided first aid to Berkovec. He behaved very professionally. He knows first aid and pulled out the player’s tongue. My information is that both Berkovec and Krch went for scans and Berkovec is staying in hospital but Krch has been allowed out. They suffered bad head injuries and there is a danger of haemorrhaging. I hope there won’t be more serious consequences.”

Slavia Prague climbed to the top of the league with an 8:1 away demolition of Příbram at the weekend. However, Viktoria Plzeň, who drew 0:0 with Zlín, are just one point behind in second place and have a game in hand. Incidentally Plzeň and Slavia face each other in the capital next weekend and that game is already sold out. 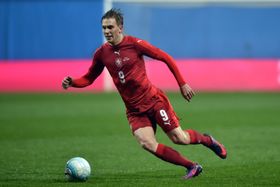 Bořek Dočkal, photo: CTK Sparta Prague are six points behind the leaders after a 3:1 defeat at Jablonec. Last week Sparta were knocked out of the Europa League by Rostov and also lost midfielder Bořek Dočkal to Henan Jianye. The Chinese Super League club are reported to have paid almost CZK 240 million for Dočkal, an enormous sum by Czech league standards.

The weekend also saw the return of Olympic judo champion Lukáš Krpálek. In his first competition since Rio de Janeiro, the Czech moved up from the below 100kg category to the heavyweight 100kg+ level at the Judo Grand Prix in Dusseldorf. However, after winning all his group bouts, Krpálek was left disappointed after losing both in the semi-finals and the third-place decider.

“Of course it’s going to grate. I know it’s a new category, it’s as if I am starting out again. But at the same time I’m somebody who doesn’t like to lose – even if I am up against the very best competition, I don’t want to lose. Unfortunately I lost twice. But I know you can’t win from the very beginning. I have a lot of things to work on.”

Lucie Šafářová has been beaten in the final of the indoor Ladies Open in Budapest. The Czech lost 7-6 4-6 3-6 in Sunday’s match against local top seed Timea Babos. The two had previously reached the semi-finals of the doubles in Budapest as a pair.