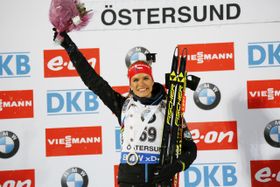 Gabriela Soukalová, photo: CTK On the World Cup biathlon circuit, Czech competitor Gabriela Soukalová won the women’s 7.5 kilometre sprint in Ostersund at the weekend winning in a time of 19 minutes, 46 seconds and two one hundreds of a second. Fifteen seconds back was Italy’s Federika Sanfilippo, with her first-ever podium finish, while Olena Pidhrushna of Ukraine was third, behind by 38.4 seconds. 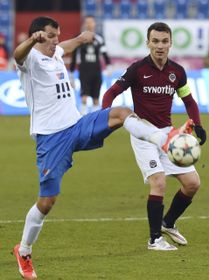 Baník Ostrava - Sparta Prague Sparta Prague hung on for a 1:0 win over Baník at the weekend despite playing worse than their opponents in Ostrava for much of their match in the Synot Liga. Sparta were able to capitalise on a howler by Baník goalkeeper Jiří Pavlenka who dropped the ball, allowing Sparta’s David Lafata to pounce and score easily in the 28th minute. Baník had several opportunities in the match but were not able to draw level. Sparta are second in the overall standings, behind Viktoria Pilsen.

Čech named Man of the Match against Sunderland

Czech goalkeeper Petr Čech was named man of the match at the weekend in Arsenal’s 3:1 win over Sunderland. While the scoreline suggests otherwise, Arsenal were not in the best of form and Čech was forced to make more than a few quality saves for the Gunners. As BBC Sports noted, after almost being 2-1 down, the Gunners were soon 2-1 up. The three points put Arsenal in second place behind Leicester in the Premier League.

NHL action: Jágr gets two assists in defeat against Devils 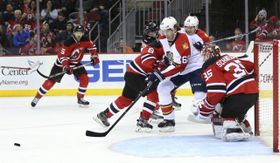 New Jersey Devils - Florida Panthers, photo: CTK In hockey, Czech legend Jaromír Jágr snapped a four-game drought and earned two points on two assists against his former club the New Jersey Devils on Sunday. The Florida Panthers scored twice against the Devils but still lost; the final score was 4:2. Florida had been on a five game winning streak and are currently 16th in the National Hockey League.

Men’s tennis No.6 Tomáš Berdych lost his singles and doubles exhibition match in the Premier Tennis League in Manila at the weekend. In the singles, Berdych lost the lone set against Milos Raonic of Canada 4:6 and lost the doubles with partner Daniel Nestor 3:6 against the French duo of Richard Gasquet and Edouard Roger-Vassellin. Berdych was part of the UAE Royals who lost by an overall score of 29:18 against the Philippine Mavericks.