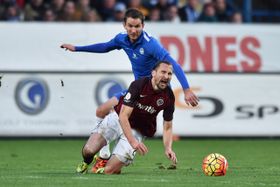 Slovan Liberec - Sparta Prague, photo: CTK There has been a change at the top of the Czech soccer league. Reigning champions Sparta Prague had been leaders since way back on August 9 but slipped off that perch at the weekend after a 1:0 away defeat to Slovan Liberec.

The result leaves the north Bohemians six points off the top one game away from the mid-point in the season and comes thanks to a perhaps unlikely hero.

Liberec’s striker Dzon Delarge has often flattered to deceive since joining the club three years ago and only started due to a long injury list.

But the Congolese international came up trumps on Sunday with the only goal of the game against Sparta, a well taken strike midway through the second half. Jindřich Trpišovský is the coach of Liberec:

“There were a lot of question marks over playing him. You never know with Delarge. In the past I’ve given him a hard time – now I’ve got to praise him. He has started fighting for his place in the sun and has shown that when he wants it, and when his head is in the right place, he can help us a lot.” 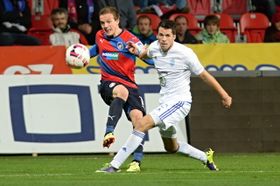 Viktoria Plzeň - Mladá Boleslav, photo: CTK Delarge also helped Viktoria Plzeň, who are now three points clear at the top after they beat third-placed Mladá Boleslav 1:0 at home to leapfrog over Sparta. The only goal of that game came from Michal Ďuriš, who now has an unrivalled 11 league strikes to his name this season.

Plzeň are in action again on Thursday, when they travel to Dinamo Minsk for a Europa League clash. In the same competition Sparta play host to Asteras, a Greek side who have never won an away game in Europe. 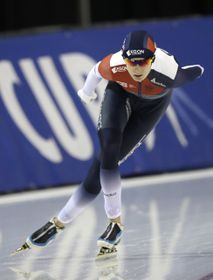 Martina Sáblíková, photo: CTK Speed skater Martina Sáblíková improved her own Czech record in the 1500m at the World Cup in Salt Lake City at the weekend, setting a new best of 1:53:44 on her way to third place. Sáblíková, a three-time Olympic champion, also came first in the 5000m in Salt Lake City, a week after winning the 3,000m in Calgary, and her coach Petr Novák says it has been the best start to a season that he can remember.

Ondřej Synek has just been named Czech Rower of the Year for the sixth time ever and the third time in a row. The accolade follows the 33-year-old’s triumph in the men’s single sculls at the World Championships in France in September.

Reigning Extraliga champions Litvínov notched up their first win after a string of seven defeats on Sunday. Litvínov beat their neighbours Chomutov on penalties to move, if only on goal difference, off the bottom of the league table. Leaders Liberec, meanwhile, won their first game in three attempts with a 2:1 victory over Pardubice and are now four points clear at the other end.