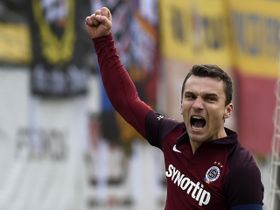 David Lafata, photo: CTK It’s “as you were” at the top of the Czech soccer league following the weekend’s action. Sparta Prague continue to lead Viktoria Plzeň by goal difference alone after a 4:0 away victory over Příbram on match day 10. In the first half Sparta keeper David Bičík kept the visitors in contention with a series of interventions. But after the break the tide turned. Captain David Lafata opened the scoring on 55 minutes for his eighth of the season, Nigerian forward Kehinde Fatai grabbed two and Tiemoko Konate of Ivory Coast completed the scoring. Speaking after the game, Lafata agreed that the score-line was rather flattering to him and his Sparta team-mates.

“Yes, we’re glad to have won. The first half was nothing special. But after the opening goal I believed that we’d finish the game off. It wasn’t an easy match by any means, but the fact we opened the scoring meant that Příbram were forced to play more openly.” 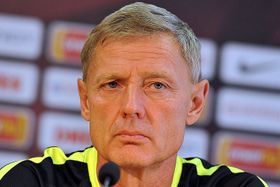 Zdeněk Ščasný, photo: Filip Jandourek Sparta manager Zdeněk Ščasný has been fined EUR 3,000 by UEFA after comments he made about the referee following a Europa League game against Greek side Asteras Tripolis. Ščasný is also barred from the club’s next two games in the competition, against Germany’s Schalke. The first of those matches is on Thursday.

Plzeň beat this season’s top flight surprise package Zlín 4:2 at the weekend. Zlín, promoted last season and now in ninth, put up a good fight against the title contenders but will feel hard done by after dubious penalty and offside decisions went against them. The Moravians managed to come back from 2:0 down to draw level, only for Plzeň to again establish a two-goal advantage and keep the pressure on Sparta. Elsewhere, third-placed Slovan Liberec could only draw 1:1 with Sigma Olomouc on the road.

Interestingly after the weekend the top four teams in the domestic soccer league now occupy the exact same spots as in ice hockey’s Extraliga: Sparta, Plzeň, Liberec and Mladá Boleslav. David Krejčí (left), photo: CTK The Czech Republic’s David Krejčí went top of the points table in the NHL after notching up one goal and two assists for the Boston Bruins in a 5:3 win over the Arizona Coyotes at the weekend. The best paid Czech player in the league has four goals and five assists so far this season. Also in the hockey news across the pond has been Tomáš Plekanec, who scored his fifth goal of the season for Montreal in a 4:1 win over Detroit. 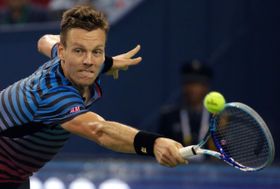 Tomáš Berdych, photo: CTK Tomáš Berdych has secured a place in tennis’s ATP World Tour Finals in London in a month’s time. It is the sixth time in succession that Berdych has qualified for the event, which features the eight most successful players of the season. Results earlier in the year in particular helped the top Czech men’s player achieve sixth place overall in 2015.