In Sports News this Monday: Jágr, 43, signs one-season contract extension with Florida; Litvínov edge toward first ever Extraliga title after going 2:0 up on Třinec; and Sparta beat Slavia but still trail Plzeň by five points with seven rounds of Czech soccer league to go. 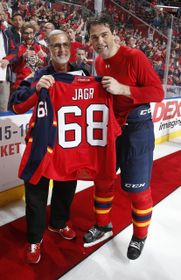 Jaromír Jágr, photo: CTK The veteran Czech ice hockey star Jaromír Jágr is set to spend another season at the Florida Panthers, the club he joined in February from New Jersey Devils. Jágr’s new one-year contract was announced just a day after the end of an NHL regular season in which he notched up six goals and 18 points in 20 games with the Panthers.

Speaking on the official NHL website, the Czech forward – who recently turned 43 – said he liked the club’s style and appreciated the chance to prove he’s still got it.

“A lot of people thought I’m done. And those young guys give me extra energy, extra life, and I’m glad I can continue to play… I still believed in my game and I felt good [at New Jersey Devils] earlier in the season. I said I felt the best I’d felt in the last 10 years. For whatever reasons, something happened. But when I came here, from the first game, the way we play, not only our line but the whole time – it was a kind of speedy game, up and down. I could see how talented this team is.”

Despite spending three years in Russia with Omsk, Jágr has a phenomenal record in the NHL. He is fourth in the league’s history in terms of points, fifth in goals and sixth in assists.

Meanwhile, fans here in the Czech Republic are hoping he will line up with the national team for the world championships being held in Prague and Ostrava next month. Jágr has said he will join the Czech training camp – but has yet to say whether he will come out of self-imposed international retirement for the tournament.

Litvínov edge towards first Extraliga title after going 2:0 up over Třinec

Třinec - Litvínov, photo: CTK Staying with ice hockey and in the Czech Extraliga, Litvínov are leading Třinec 2:0 in the playoffs final after a 3:2 victory on Sunday night. That result left Litvínov halfway to what would be the first league title in their 56-year history. The series continues on Wednesday.

In the playoffs to remain in the Extraliga, Slavia Prague slipped into the relegation positions after losing to Olomouc on Sunday. Chomutov are the on same points as Olomouc after overcoming České Budějovice in round nine. 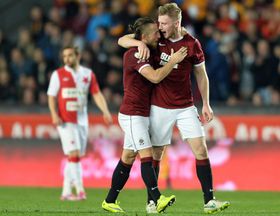 Sparta - Slavia, photo: CTK Sparta came from behind to beat Slavia 2:1 at home in the 283rd Prague football derby on Saturday. However with seven rounds remaining the defending champions are still five points behind leaders Viktoria Plzeň. The West Bohemians beat Brno 4:1 to increase their chances of taking a third league title in five years. Jablonec remain in third, 13 points ahead of their nearest rivals, after a 4:0 win over Hradec Králové.