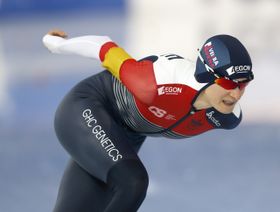 Martina Sáblíková, photo: CTK Speed skater Martina Sáblíková cemented her position as leader in the World Cup 3000 metres with a win in Norway’s Hamar on Sunday. What’s more, it was the third time in a row that Sáblíková beat current Olympic and world champion Ireen Wuest at that distance. Sáblíková achieved her latest success despite having a case of bronchitis that led her to sit out the mass start race in Hamar – and the 27-year-old said her result in the 3000 metres had been unexpected.

“I was really surprised because my only task today had been to stick as close as possible to Ireen. But then I had enough in the tank at the end to come first, which shows that my preparation was good. And it shows that I am in good form ahead of the World Championships, which start in 10 days’ time.”

Maslák wins on comeback in Moscow 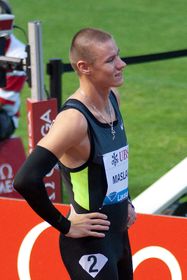 Pavel Maslák, photo: Ludovic Péron, CC BY-SA 3.0 The Czech runner Pavel Maslák came first in the 400 metres at the Russian Winter athletics meeting in Moscow on Sunday, making the perfect return after a nine-month absence with a thigh injury. His time of 45.80 seconds secured Maslák a place at next month’s European Indoor Championships, where the 24-year-old will no doubt enjoy vociferous local support at Prague’s O2 Arena as he bids to defend his 2013 title in the competition. Denisa Rosolová and Zuzana Hejnová also had injury-hit seasons in 2014 and also earned berths at the European Indoor Championships after finishing third and fourth, respectively, in the women’s 400 metres in Moscow. 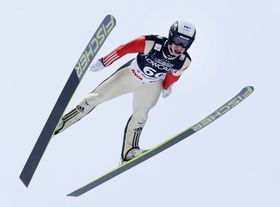 Roman Koudelka, photo: CTK Ski jumper Roman Koudelka has reached the podium on no fewer than seven occasions so far this season, the latest time coming after a third-place finish in a World Cup event at Germany’s Willingen on Sunday. The 25-year-old’s second-round jump of 139 metres also means he has climbed one spot to third overall in the competition.

No medals for Czechs at Cyclo-cross World Championships in Tábor 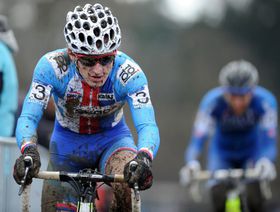 Tomáš Paprstka, photo: CTK Local fans got to experience the Cyclo-cross World Championships up close at the central Bohemian town of Tábor at the weekend. However, they didn’t have much to celebrate, with Czech competitors failing to pick up a single medal in the event’s four races – the first time that had ever happened in the competition. Their coach put the failure down to the fact that the Czech team is currently going through a change of generation. 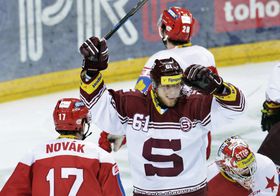 Slavia Prague - Sparta Prague, photo: CTK Sparta Prague have responded in style to a brief loss of form towards the end of the regular season, scoring nine times in their last two outings in ice hockey’s Extraliga. After a 9:1 walloping of Karlovy Vary, on Sunday Sparta overcame local rivals Slavia Prague 9:4. Nevertheless, the third-placed club are still a full 18 points behind leaders Třinec, who overcame Liberec 2:1 with a goal in the final minute. Second-placed Litvínov, meanwhile, lost by the same score-line to Kometa Brno in the 44th round.