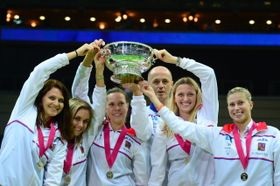 Lucie Šafářová, Klára Koukalová, Lucie Hradecká, Petr Pála, Petra Kvitová, Andrea Hlaváčková, photo: CTK The Czech women’s tennis team have won the Fed Cup for a remarkable third time in four years. Led by double Wimbledon winner Petra Kvitová, the Czechs – who exited at the semi-final stage last season – overcame an ambitious German team in only three rubbers in Prague. Kvitová picked up the first point with a 6-2 6-4 win over Andrea Petkovic before on Sunday afternoon collecting the crucial third with a thrilling 7-6 4-6 6-4 defeat of Angelique Kerber to spark scenes of joy at a packed O2 Arena. The world number four, who is still only 24, spoke to Czech Radio moments after sealing another famous victory for the Czech Republic.

“I think it was a really difficult game. It was a battle right till the end – Angie and I fought for every ball. We both gave our all. I don’t know what decided it in the end – perhaps it was something I found within myself, some emotion, some euphoria that I got not only from the crowd but above all the team. I think that’s what decided it – at the end of the day it wasn’t just about the tennis itself.”

Alongside Petra Kvitová, the Czech team comprised Andrea Hlaváčková, Lucie Hradecká and Lucie Šafářová, while their non-playing captain was Petr Pála. There were reports on Monday that the ladies had partied into the wee small hours, with the defeated German team among those taking part in the celebrations.

Špotáková named Athlete of Year after comeback from maternity leave 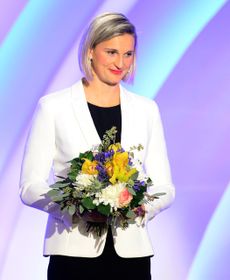 Barbora Špotáková, photo: CTK Barbora Špotáková has been named Czech Athlete of the Year. The reigning Olympic javelin champion picked up the award for the seventh time in Prague on Saturday night, equaling a record jointly held by her trainer, the great Jan Železný, and Helena Fibingerová, a multiple world champion in the shot put. Špotáková has had a great 2014, winning at the European Championships for the first time in a comeback season after having her first child.

“It’s surprised me how well things have gone since I gave birth. I was immediately back to my usual weight. And I got back in physical condition because we live in Brdy so I can go running with the pram right from our home. Which I still do to this day.” 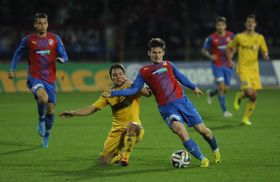 Meanwhile the Czech national side have gathered for a brace of Euro 2016 qualifiers. They play Kazakhstan away on Thursday before a home match with surprise group leaders Iceland on Sunday.