After positive start under Beránek Slavia lose five on trot 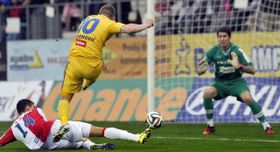 Jihlava - Slavia Prague, photo: CTK Manager Miroslav Beránek made a great start at Slavia Prague on his return to the club after an 11-year gap, with his charges winning four of their first five games, including a victory over title contenders Viktoria Plzeň. However, that honeymoon period is well and truly over, with Slavia succumbing to their fifth defeat in a row on Saturday when they lost 1:0 away to Jihlava. After the game, Beránek said the team had performed better in their previous outing, against Sparta, and were missing defender Martin Latka and striker Milan Škoda through injury.

“Latka is the captain and is the conductor of our defence and Škoda is our top scorer; he didn’t convert his chances against Sparta but his activity and approach had an impact. Today we didn’t have players like them, active players. We lacked quality in the centre, in our crossing and also in our finishing. We didn’t score a goal. It’s unfortunate.” 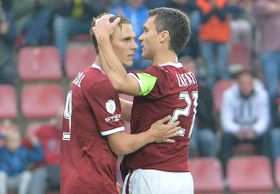 Bořek Dočkal, David Lafata, photo: CTK Elsewhere, Plzeň are still top of the league after a 1:0 win over Teplice, while title-holders Sparta continue to breathe down their necks; they are one point Plzeň after beating Slovan Liberec, also 1:0. Last week Sparta captain David Lafata missed a penalty, so when the referee pointed to the spot his teammate Bořek Dočkal stepped up – and buried it in the net.

“Lafata is a great striker and has scored loads of penalties, so I don’t think there’s any reason to change our designated penalty taker. But today he didn’t really want to, so I took it. We knew there could be just one goal in it. He wasn’t feeling 100-percent confident so I think it was professional of him to let somebody else take it.”

The Czech national team have been gathering in Prague ahead of two Euro 2016 qualifiers. On Friday they play Turkey away, followed by another trip, to Kazakhstan, for a game taking place next Monday. 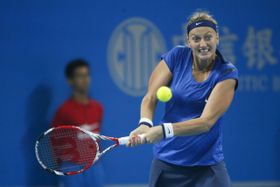 Petra Kvitová, photo: CTK Petra Kvitová and Tomáš Berdych both reached the finals at tennis’s Beijing Open – and both suffered defeat at the last hurdle. The Czech women’s number one lost 4-6 6-2 3-6 to Maria Sharapova of Russia, while her male counterpart was roundly beaten, 0-6 2-6, by Novak Djokovic. Following those defeats both Czechs have fallen one place in the world rankings: Kvitová to fourth and Berdych to seventh. 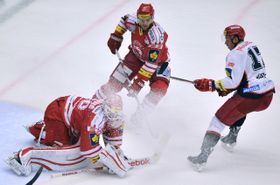 Třinec - Hradec Králové, photo: CTK In the ice hockey Extraliga, Třinec are ahead of Litvínov on goal difference at the top of the table. Třinec hammered Hradec Kralove 6:0 on Sunday evening, while Litvínov overcame Liberec 3:1. The leading pair are four points ahead of third-placed Pardubice, who beat Vítkovice 4:2.