In Sports News this Monday: Czechs finish outside medals at Ice Hockey World Championship in Belarus after failing to score in final two games – coach Ružička says players need to learn to keep it simple; legend Jágr quits international hockey at 42; and Berdych and Štěpánek advance at French Open. 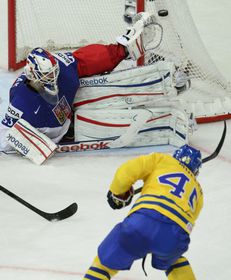 Czech Republic - Sweden, photo: CTK The Czech Republic finished outside the medals at the Ice Hockey World Championship in Belarus, after losing 2:0 to Sweden in a game on Sunday to decide bronze.

The Czechs had a poor tournament in general, winning only three games out of 10 in regular time and scoring just 24 times – and not once in their last two matches.

They seemed to have turned a corner with a win over the USA in the quarter-finals. But the Czechs’ shortcomings were again exposed in their semi-final clash with Finland, when they could not match their opponents for speed and were toothless in a 3:0 defeat.

Various explanations have been offered as to why the world championship didn’t go according to plan for the Czech Republic, including the inexperience of the defencemen and a lack of leaders on the ice.

For his part, coach Vladimír Ružička said the squad needed to adopt the kind of fast and direct style of play prevalent in the NHL.

“It’s very complicated. We’re forever making speculative efforts. When we have chances to shoot between the circles we push the puck to the side and shoot from the corner. We’ve got to change it. We’ve got to talk about it, but the most important thing is that we make things simpler on the ice.” 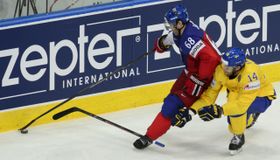 Jaromír Jágr (left), photo: CTK Sunday’s third place game was a milestone in Czech hockey as it was living legend’s Jaromír Jágr’s final appearance for the national side.

The 42-year-old was the country’s most productive player in Belarus with four goals and the same number of assists.

But the no. 68 was frustrated by the approach of his teammates, many of whom do not play in the NHL, telling reporters he needed players around him who could keep the puck on their stick and were closer to him in style.

Jágr’s trademark smile didn’t completely abandon him when he was announcing his international retirement. But he was clearly angry about one aspect of the world championship – the standard of refereeing.

“It’s the worst I’ve ever seen. I’ve never seen anything like it. They’re amateurs. When I go back to the NHL I’m going to congratulate the refs after every game. Honestly, if I was playing in the most important game of my career and it was against the USA or Canada, I’d want four refs from the USA or Canada.”

By the way, next year’s Ice Hockey World Championship will be held in Prague and Ostrava.

Czechs Tomáš Berdych and Radek Štěpánek have both advanced to the second round at tennis’s French Open in Paris. Berdych, the world number six, beat Peter Polansky of Canada 6-3 6-4 6-4, while Štěpánek overcame Facundo Arguello of Argentina 6-7 3-6 6-4 6-3 6-2.