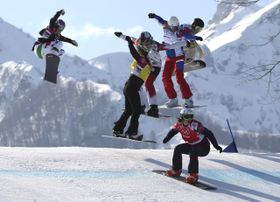 Eva Samková (bottom right), photo: CTK The Czech team have taken their first gold medal at the Winter Olympics in Russia’s Sochi through Eva Samková, who joins a select band of Czech Winter Olympic winners after triumphing in snowboard cross. Samková, who is 20 years old, is absolutely all over Monday’s newspapers, wearing her trademark make-up moustache for good luck and carrying the Czech flag above her shoulders. The first Czech snowboarder to ever reach the podium at the Olympics, Samková used her pace to dominate Sunday’s heats, semi-finals and final, in which she had opened up a 10-metre lead by the time she got a third of the way down the hill. The other Czech medals so far are bronze for Jaroslav Soukup in the biathlon sprint, silver for speed skater Martina Sablíková in the 3000m and silver for Ondřej Moravec in the biathlon pursuit.

Jágr and Co. face spicy matchup with Slovakia for place in quarters 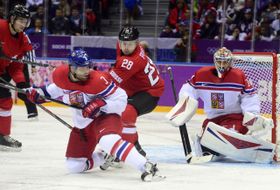 Czech Republic - Switzerland, photo: CTK The country’s ice hockey players will need to up their game if they are to also get on the medals board in Sochi. In their group games, a rather toothless Czech side lost to Sweden and Switzerland, only managing to beat Latvia. Now they are into the knock-out stages, the draw could hardly have been spicier for Jaromír Jágr and Co.; they will have to overcome neighbours and former federal partners Slovakia in Tuesday’s last 16 tie if they are to keep their medal hopes alive. The winners of that game will face the USA for a place in the semi-finals. 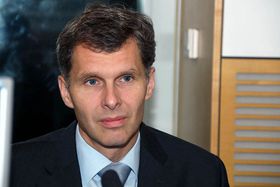 Jiří Kejval, photo: Šárka Ševčíková Meanwhile, the chairman of the Czech Olympic Committee, Jiří Kejval, says he is satisfied with how the country’s team have been doing so far.

“The start of the Games was spectacular – we won three medals in the first three days. Then on Sunday after a short break we earned finally a gold medal that we’d really been expecting to win. So, so far so good, and I’m sure they haven’t heard the last of us.” Tomáš Berdych, photo: CTK Away from Sochi, Tomáš Berdych has won his first tournament since October 2012. The Czech men’s tennis number one beat Marian Cilic of Croatia 6-4 6-2 in the final of the ABN AMRO World Tennis Tournament in Rotterdam on Sunday for a career ninth ATP title. The result has helped him climb to sixth in the world rankings.