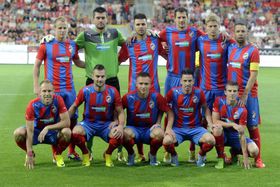 Viktoria Plzeň, photo: CTK We begin with football where Czech titleholders Viktoria Plzeň are close to reaching the group stage of the Champions League for the second time in two years. After beating Bosnia and Herzegovina’s Željezničar Sarajevo and Estonia’s Nomme Kalju in the second and third qualification rounds, respectively, the Czech champions on Friday drew the Croatian side Maribor in the competition’s final round of qualification.

Plzeň have welcomed the result of the draw as they consider Maribor one of the easier possible opponents; also, Slovenia is not that far for their fans to be able to travel to the match. Plzeň captain and playmaker Pavel Horváth joked that if Plzeň’s luck did not run out, they might go right on to the final.

“I expect that our fans will show up in great numbers to support us. We are playing the first leg at home so we’ll see what position we’ll have before the second match. But I believe that if the draw is good and we draw weak opponents, we could win the Champions League.”

The first leg of the Champions League’s final qualifier will be played in Plzeň on August 20, the second eight days later in Slovenia. 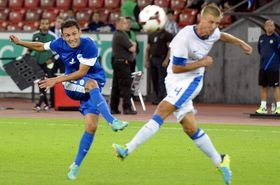 Slovan Liberec - FC Zürich, photo: CTK Two other Czech clubs are one step away from reaching European football’s second-tier competition, the Europa League. In the third qualification round, Liberec beat Switzerland’s FC Zürich 4:2 on aggregate and will play Italy’s Udinese to try and reach the Europa League’s group stage. For their part, Czech cup winners Jablonec defeated Norway’s Strømsgodset and will face Spain’s Real Betis in the final qualifier. The first legs are both scheduled for August 22.

Gambrinus liga: Plzeň and Sparta on top after round four Znojmo - Viktoria Plzeň, photo: CTK In the domestic top division, meanwhile, Viktoria Plzeň beat newcomers Znojmo 1:0 in the fourth round on Sunday to remain at the top of the league table with a full 12 points. Last season’s runners-up Sparta Prague are ranked second on goal difference after they defeated city rivals Bohemians Praha 1905 2:1 on Saturday. Plzeň and Sparta will clash in the highlight of the Gambrinus liga’s fifth round on Saturday; the tickets for the game sold out in just three hours. Both clubs are however set to lose some of their best players: Plzeň midfielder Vladimír Darida and Sparta striker David Kadlec are reportedly close to being sold to teams in the German Bundesliga. 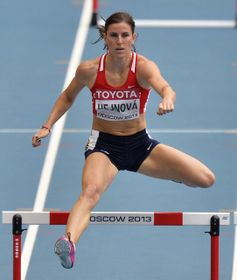 Zuzana Hejnová, photo: CTK We now turn to Track & Field at the World Athletics Championships underway in Moscow. The Czech team has not won any medals since the event kicked off in Saturday. However, the biggest Czech hopefuls are yet to appear in their finals. Hammer thrower Lukáš Melich qualified for the final on Saturday with the second longest throw, while pole vaulter Jan Kudlička won the qualification after beating the height of 555 cm. The men’s pole vault final is scheduled for Monday afternoon.

On Monday, Czech runners Denisa Rosolová and Zuzana Hejnová qualified for the 400 metres hurdles semifinals after they both finished first in their heats. Hejnová won in 55.25 which was her slowest time this season but she told Czech Radio that was all she needed.

“I have to say it was an easy heat. When I saw the starting list I thought this was the easiest of them all, and it was true because ours was the slowest. But I think that if I hadn’t let off at the end, I would have run around 54:50, and it would not look so bad. But there was no reason for me to do that.”