In Sports News this Monday: Plzeň make it nine points out of nine (and 13 goals in three games) with trouncing of Ostrava in Czech top flight; Sparta are neck and neck with win over Brno, though four fans are injured as storm fells tree; Eintracht Frankfurt are eyeing Sparta’s Kadlec; and swimmer Chocová is disqualified in final at 50m breaststroke in Barcelona.

Plzeň have 100 percent record – and 13 goals in three games 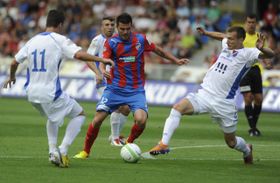 Viktoria Plzeň - Baník Ostrava, photo: CTK After three rounds of the Gambrinus Liga the two leading title contenders, reigning champions Viktoria Plzeň and last season’s runners up Sparta Prague, are the only teams with the maximum nine points out of nine. Plzeň have really hit the ground running, with 13 goals scored so far. Four of them came, without reply, in a convincing home victory over Baník Ostrava on Saturday. The West Bohemians’ manager, Pavel Vrba, said the fact his side went 3:0 up by half time meant he could relax after the break.

“It’s always more pleasant when you have the game under control and it’s 3:0. Because 2:0 is kind of a deceptive score-line: if the other side scores then it can become complicated. But when it’s 3:0 and the team are putting in the kind of quality performance we did, then it’s a lot calmer and so am I.” 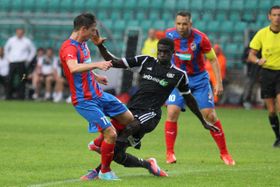 Plzeň - Kalju, photo: CTK That result came despite the fact Plzeň rested several key players ahead of a Champions League game on Tuesday that ought to be a walk in the park; they beat Estonian side Kalju 4:0 in Tallinn last week in the first leg of that tie and surely already have one foot in the fourth and final round of qualification for club soccer’s greatest competition.

Sparta neck and neck with leaders after Brno win 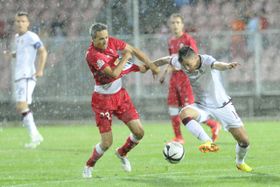 Sparta - Brno, photo: CTK Sparta seem to have put their early exit from Europe behind them and only trail Plzeň on goal difference after their latest league win, a 3:1 away defeat of Brno in the Moravian capital. That game was marred by very powerful storms that saw a tree fall on fans, injuring two women and two children who were waiting in line at a sausage stand at half time.

Meanwhile, one of Sparta’s prize assets, 21-year-old striker Václav Kadlec, is reportedly wanted by Eintracht Frankfurt. However, the Germans say they want any deal to go through this week, before the Bundesliga season begins next weekend. 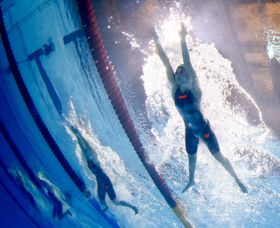 Photo: CTK Petra Chocová was unlucky on Sunday in the final of the women’s 50 metres breaststroke at the World Championships. Chocová was the Czech Republic’s biggest medal hopeful in Barcelona, but when her goggles slipped off and she emptied them of water she committed a foul move and was disqualified. She had had the fifth fastest time – and set a new Czech record of 30.31 seconds – in the semi-finals. In all, five Czech swimmers finished in the top 10 in their disciplines in Barcelona, which represents a marked improvement on the last World Championships in China in 2011, when only two achieved top 10 placings.