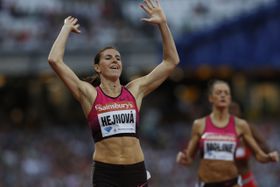 Zuzana Hejnová, photo: CTK Zuzana Hejnová has broken her own recently set Czech record in the women’s 400 metre hurdles. The 26-year-old crossed the line at a Diamond League meeting in London on Friday on 53:07 seconds, coming first in the fastest time seen in the discipline this year. Indeed, Hejnová, who came third at last summer’s Olympics, has won all eight races she has competed in so far in 2013, including five in the Diamond League. While she must rank as a favourite to top the podium at the World Championships in Moscow next month, Hejnová has failed to live up to expectations at previous championships and she’s saying she merely wants to take any medal home from the Russian capital. 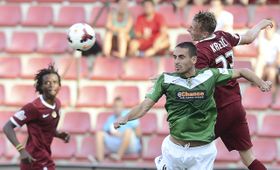 Sparta Prague - Jablonec, photo: CTK Sparta Prague have apologised to fans after the club fell at their first hurdle in Europe this season, suffering a surprise defeat to Sweden’s Häcken in the qualification stages of the Europa League. With Sparta’s management saying they will announce changes in the middle of August, coach Vítězslav Lavička’s position looks uncertain; he will have been more relieved than anybody by Sparta’s 2:1 home win over Jablonec on Sunday.

Plzeň notch up another league win ahead of Estonian test 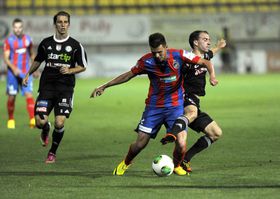 Příbram - Viktoria Plzeň, photo: CTK Reigning Czech champions Viktoria Plzeň also made it two league wins out of two so far this season, with a 4:2 away victory over Příbram. After seeing off Željezničar Sarajevo in a qualification game for the Champions League, Plzeň are now set to face Kalju of Estonia in the competition’s third qualifying round; the first leg of that tie takes place in Tallinn on Tuesday. 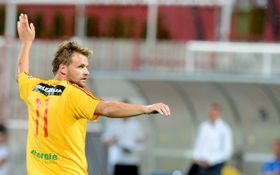 Zbyněk Pospěch, photo: CTK Dukla Prague striker Zbyněk Pospěch scored all of the club’s goals in their 4:0 win over Sigma Olomouc in the Czech capital on Saturday. No player has ever scored more than four times in a single game since the Czech league was established two decades ago. Klára Spilková, photo: Tristan Jones / Official website of Klára Spilková Czech golfer Klára Spilková has achieved her best placing to date on the Ladies European Tour, coming joint sixth in a tournament at England’s Denham at the weekend. In fact, Spilková was leading for a while on Sunday before falling off the pace in the final round. The Czech, who is only 18, has been on the tour for three years and is now ranked 19th. In two weeks’ time local fans will get to see her in action at the Pilsen Golf Masters, which is being held within the framework of the Ladies European Tour.