Petr Čech, photo: CTK The Czech Republic’s chances of reaching the 2014 football World Cup in Brazil have receded after a 0:0 draw with Italy in a qualifier in Prague on Friday night. The home side produced one of their best performances under coach Michal Bílek and the visitors’ goalkeeper Gianluigi Buffon was far busier than Petr Čech. On top of that, the Italians’ hotheaded striker Mario Balotelli was sent off with 20 minutes remaining. But in the end the Czech Republic failed to find the net and were left to rue a missed opportunity. Defender Tomáš Sivok summed up the mood in the Czech camp: 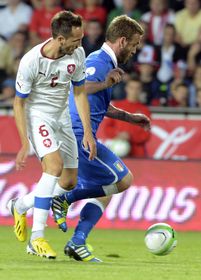 Tomáš Sivok (left), photo: CTK “We didn’t concede but we didn’t score either. For us it’s a loss. If things had gone differently we might have been satisfied. But we’re disappointed because we were the best team and we had more chances... But we will keep fighting. We have decisive games ahead of us and we’re going to fight for second place.”

That result leaves the Czech Republic – who have nine points from six games – third in Group B behind Italy on 14 points and Bulgaria on 10. There are four rounds left and a visit to Bulgaria in mid-October could go some way to deciding who finishes second and is in with a chance of a playoffs spot. 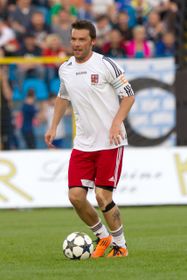 Marek Jankulovski, photo: CTK The Czech team that reached the Euro 2004 semi-finals was reunited on Friday for a charity testimonial for Marek Jankulovski in Ostrava, as the left winger/back officially ended his career. Former AC Milan teammates of his, including Gennaro Gattuso, chartered a plane to North Moravia in order to take part. Miroslav Pelta, photo: CTK Off the pitch, Miroslav Pelta has been re-elected chairman of the Czech Football Association. Pelta, a former general director of Sparta Prague, was unopposed in Saturday’s vote. Among those elected deputy chair was Roman Berbr, a rival of Pelta’s who was reported last week to have collaborated with the secret police during the Communist regime. Jaromír Jágr (left), photo: CTK Czech ice hockey legend Jaromír Jágr has reached the final of the Stanley Cup with the Boston Bruins – a full 21 years after he last lifted the trophy as a fresh-faced youngster with the Pittsburgh Penguins. If the Bruins win, Jágr – who only joined the club in April – will set the NHL’s all-time record for longest gap between Stanley Cup rings. Alongside the veteran right wing will be compatriot David Krejčí; with 21 points, the 27-year-old has been by some way the most productive player in the playoffs. However, even if those two are on the losing side, Czech fans will still get to see the coveted trophy this year: the Bruins’ opponents in the final, the Chicago Blackhawks, have Michael Frolík and Michal Rozsíval on their roster. 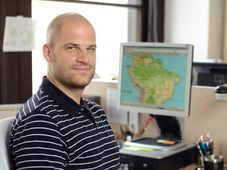 While most of us can only dream about attending a World Cup or Olympic Games, David Koubek got to experience both as Czech Radio’s…