In Sports News this Monday: Zuzana Hejnová wins 400m hurdles at Diamond League meeting in Shanghai; Baník Ostrava football club come dangerously close to bankruptcy; Arsenal and Spurs said to be keen to snap up Czech striker Matěj Vydra; and Tomáš Berdych overcomes one bogeyman in Rome but can’t get past second. 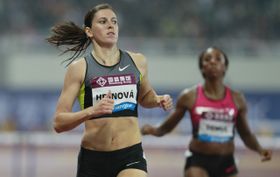 Zuzana Hejnová, photo: CTK The Czech athlete Zuzana Hejnová topped the podium in the 400m hurdles at the second Diamond League meeting of the year in Shanghai on Saturday. The 26-year-old Olympic bronze medal holder completed the race in 53:79 seconds, the fastest time seen in the discipline so far this season. On the phone from China, Hejnová was asked whether she felt she could sustain her current fine form until the World Championships in Moscow in August.

“I think it’s quite soon to talk about it. The World Championships in Moscow are some way off and I have a lot of races between now and then. But I believe I will reach my best form in Moscow and that I’ll push my times down this year, perhaps to below 53 seconds.”

Baník Ostrava saved from bankruptcy by council purchase of stadium Bazaly stadium, photo: Tomáš Adamec There were no games in the Czech first division at the weekend because of the culmination of the Ice Hockey World Championship. However, there has been one big story, with the news on Monday that Baník Ostrava have been saved from bankruptcy. The only hope of survival for the heavily indebted club was if the Ostrava city council bought its Bazaly stadium. A first vote went against the proposal, leading to news flashes that Baník was going bust – which would have also meant expulsion from the top flight. But in a dramatic twist, a second vote was held that went the club’s way, saving the 2004 league champions from doom. 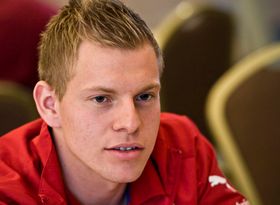 Matěj Vydra, photo: Filip Jandourek Elsewhere, English Premier League clubs Tottenham Hotspur and Arsenal are reported to be interested in snapping up Czech striker Matěj Vydra. The 21-year-old, who is contracted to Italy’s Udinese, has scored 20 goals this season while on loan at Championship side Watford. Ahead of Sunday’s playoff final, in which Watford face Crystal Palace for a place in the top flight next season, Vydra’s agent says all possibilities are still being considered.

Berdych overcomes Djokovic but again loses to Nadal in Rome 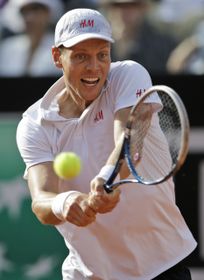 Tomáš Berdych, photo: CTK Czech men’s tennis number one Tomáš Berdych overcame one bogeyman at the Italian Open but couldn’t get past another. Berdych battled from behind to beat Serbia’s Novak Djokovic in the fourth round on Rome’s clay courts. But he couldn’t repeat the feat when he came up against Rafael Nadal in the semi-finals. The 27-year-old had only beaten the Spaniard three times in 16 meetings, and never on clay – and did not improve his balance with a 4-6 2-6 defeat on Saturday evening. Berdych remains sixth in the world rankings going into the French Open. Meanwhile, his compatriot Petra Kvitová has climbed to seventh in the women’s rankings.