In Sports News this Monday: Czechs get off to winning start at World Ice Hockey Championship with win over Belarus but are comprehensively outshot in defeat to hosts Sweden; Plzeň open up five-point gap on Sparta in the race for the Czech soccer title; and Slavia trounce Jablonec in first game under Petrouš following his return. 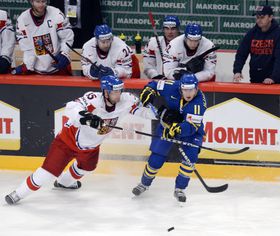 Czech Republic - Sweden, photo: CTK The Czech Republic got off to a winning start at the World Ice Hockey Championship in Sweden, beating relative minnows Belarus 2:0 on Friday. However, the Czechs’ second outing highlighted shortcomings in their play as they lost 2:1 to the hosts. While goaltender Ondřej Pavelec has been having injury problems, his replacement Alexander Salák has performed well and the Czechs’ main problem so far has been finding the net themselves; they have managed only three goals in two games (all from power plays) and were comprehensively outshot by the Swedes on Sunday.

The Czech Republic’s defensemen had to work particularly hard in that match. Afterwards one of them, Zbyněk Michálek, said the team can still turn things around.

The Czech Republic will get a chance to start putting things right in their next match against Switzerland, the surprise package of the tournament so far (that game takes place on Monday after the recording of our programme). Goaltender Salák will line up against the Swiss despite having a broken finger. 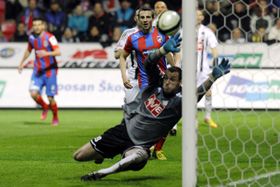 Viktoria Plzeň - České Budějovice, photo: CTK With only four rounds now remaining, Czech soccer league leaders Viktoria Plzeň have moved a full five points clear of second-placed Sparta Prague in the race for the title. Plzeň beat České Budějovice 3:2 on Friday evening, with the winning strike coming on 85 minutes, to heap the pressure on their rivals. However, Sparta were unable to respond at Slovan Liberec the following day, losing 2:0 to the defending champions and greatly diminishing their own chances of taking a first championship in three years. In fact, history would suggest Plzeň can’t be caught: no club with such a lead this close to the end of the season has ever failed to lift the league trophy.

Slavia get off to flying start under returnee boss Petrouš 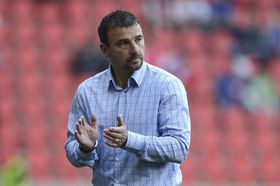 Michal Petrouš, photo: CTK Slavia Prague, meanwhile, are way off the pace in eighth place, but will perhaps take some heart as they look ahead to next season; they trounced Jablonec 5:1 in the capital on Sunday in their first game under manager Michal Petrouš, who returned to the club following the sacking of Petr Rada.