NHL hockey: Eliáš on a roll 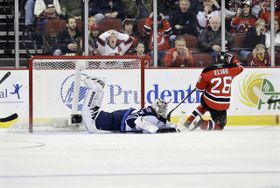 Ondřej Pavelec, Patrik Eliáš, photo: CTK New Jersey Devils’ winger Patrik Eliáš is continuing to show good form and helped his club defeat the Winnipeg Jets when the game went to a penalty shootout on Sunday. Eliáš scored the game-winning goal against the Jets’ Ondřej Pavelec. The final score was 3:2 for New Jersey. The Devils are currently second in the Atlantic Division. The Jets are second in the Southeast but remain just shy of the cut for the Stanley Cup playoffs – two points behind the New York Rangers.

In other NHL action on Sunday, Philadelphia Flyers’ goalie Tomáš Vokoun allowed just one goal in his team’s lopsided 6:1 win over the New York Islanders. In the match he made 23 saves.

Washington Capitals’ goalie Michal Neuwirth played half a game after Braden Holtby was pulled. He allowed one goal; the Caps lost 4:1 to the New York Rangers. 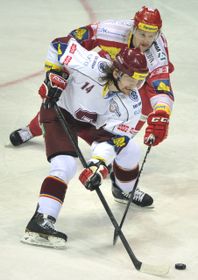 Třinec - Sparta Prague, photo: CTK In the Czech Republic the Česká pojišťovna playoffs are underway: at the weekend Plzeň squared their series with Litvínov at 1:1 after earning a 2:1 win. Třinec and Sparta Prague are also tied 1:1 in their respective series: in Game 1 Třinec down Sparta 4:0; on Sunday Sparta rebounded and managed to edge Třinec 4:3 in the shootout.

Zlín lead 1:0 in their series against Vítkovice after winning 3:1 on Sunday; in Game 1 Slavia romped 4:0 over Kladno. Playoff action between these four clubs resumes on Monday evening. Milan Baroš, photo: Czech Television Former international striker Milan Baroš, who recently returned to play for Ostrava in the Czech domestic league, broke an almost year-long drought on Saturday – scoring not once but three times to secure a 3:0 win against Hradec Králove. After the match here is what the player had to say:

“It was almost a year, wasn’t it? Of course it’s great when you score and I am happy: but what is more important is that we help save Baník. What is important is the three points and that we get Baník in a better spot.”

The hat-trick is Baroš first-ever in the domestic league. The win sees Baník move up to 10th spot in the league standings. 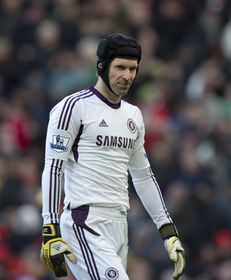 Petr Čech, photo: CTK Goalie Petr Čech has admitted he made a mistake in his club’s FA Cup quarter-final against Manchester United at Old Trafford on Sunday, writing on his website that he misread a play that allowed Henandez to score in just the fifth minute. Chelsea went down 2:0 six minutes later on a Rooney strike but were able to rebound in the second half, getting goals from Hazard and Ramirez to tie it. The second match will take place at Stamford Bridge. 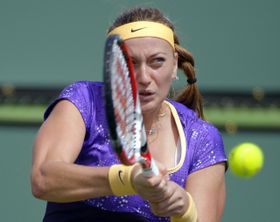 Petra Kvitová, photo: CTK Czech women’s tennis player Petra Kvitová has made it to the final 16 at Indian Wells after defeating Lesja Curenková of Ukraine by a score of 6:2, 7:6. It is the first time the number one Czech women’s player has made it so far in the tournament. In the next round she faces fellow Czech player Klára Zakopalová.