Lucie Šafářová, photo: CTK Czech tennis fans had an emotional weekend at Prague’s O2 arena. The women’s tennis team defended their title at the Fed Cup final against Serbia, winning 3-1. It was Lucie Šafářová, not the highest seeded Petra Kvitová, who got most of the praise, having won two of the three winning matches. Although there were many doubts about Kvitová’s performance given the flu she has been fighting for the past week, the 22-year-old gave a strong performance in the second match on Saturday, beating Jelena Janković 6-4, 6-1. Šafářová and Kvitová did not give up a single set on the first day, giving them a strong starting score of 2-0. Kvitová responded very modestly to her victory:

“I didn’t know what to expect from myself. I just went onto the court, I knew that I can play and that I know how to win, but on the other hand when you’re facing a top-20 player it isn’t simple.” 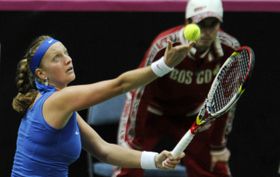 Petra Kvitová, photo: CTK Kvitová’s second match on Sunday, though, did not bring the victory her team was expecting. Losing 3-6, 5-7 to Ana Ivanović, Kvitová seemed tired on the court. But her teammate Šafářová repeated her first success and sealed the Czech victory with an astounding 6-1, 6-1 match against Janković, who was struggling with back problems. Kvitová and Šafářová celebrated with their captain Petr Pála and teammates Andrea Hlaváčková and Lucie Hradecká, who did not have to play their double match.

Tennis fans in Prague are now getting ready to watch the Czech men’s team, who will play in the Davis Cup final, starting on November 16 also here in Prague. Iveta Vacenovská, photo: Czech Television Now moving on from tennis to table tennis. Another Czech woman, Iveta Vacenovská, made the headlines this week after she got into her first Table Tennis World Tour final. Vacenovská beat this year’s European champion, the Belorussian Viktoria Pavlovich in the semi-final in Bremen, Germany. But in the Sunday final she could not overcome the much more experienced and favoured Shen Yanfei of Spain.

Sparta’s Kadlec takes a hit, Olomouc moves to the top of the chart 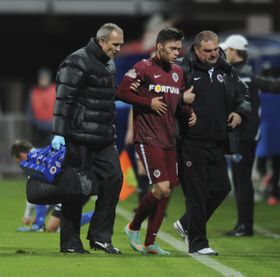 Václav Kadlec, photo: CTK Emotions were running high in the sport of football as well this weekend. During a Gambrinus league match between Prague’s Sparta and Mladá Boleslav, Sparta’s Václav Kadlec suffered a skull fracture after a head-on collision with Boleslav’s Martin Nešpor. Nešpor was also hurt, but got off with stitches and a bump. The two teams finished the match with a 1-1 tie.

Sigma Olomouc was more successful in its Sunday match against Příbram, trouncing the club 6-1. The victory helped Olomouc reach the top of the Gambrinus league chart, jumping ahead of Jablonec who had won a match against Jihlava on Friday. Viktoria Plzeň won against Slavia, without scoring a single goal themselves. The only goal of the match was served up by Slavia’s own David Hubáček into his team’s net. Plzeň’s defender Michal Ďuriš responded to the match by saying that it doesn’t matter with how many points they win, since they still get three points for the victory. 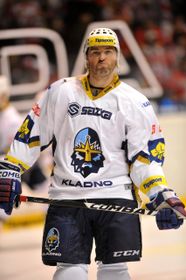 Jaromír Jágr, photo: CTK Turning now to hockey, the Kladno Knights are becoming one of the most successful teams of this year’s extraliga, not without help from Jaromir Jágr. The international star got in one goal and had three assists in the Sunday game against Chomutov’s Pirates that ended with a 7:2 victory. It took to Chomutov 50 minutes to get on the scoreboard, at which point Kladno was secure with 7 points. Here is how Chomutov’s main asset, Jaromir Jágr, commented the two last minute goals from the opponents:

“We are doing well on offense, and defense as well. It is too bad that we underestimated it at the end. We have to give more support to our goalie when we’re up 7-nil. We have to learn from this. It’s all about respecting each other. Otherwise, we’re on a roll, the fans are happy, it’s great.”