In sports news this Monday: Sparta and Plzeň clinch important wins in football’s Europa League while at home, three teams are tied on top spot in the Gambrinus Liga; in hockey, Jaromír Jágr’s Kladno draws all-time record attendance and Chomutov apologize for racist fans; and in tennis, the Czech pair Hlaváčková, Hradecká lose in the final of WTA Championships in Instabul. 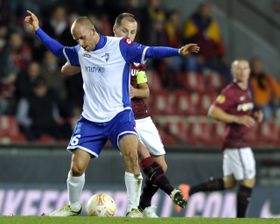 Sparta Prague - Kiryat Shmona, photo: CTK Both Czech football clubs that are taking part in this season’s Europa League have earned important victories. In Group I, Sparta Prague defeated Israel’s Kiryat Shmona 3:1 in the Czech capital on Thursday. Sparta’s Ladislav Krejčí and Václav Kadlec put the hosts two goals up in the opening ten minutes, and Ondřej Švendík added a header to give Sparta a 3:0 lead. That proved too much for the Israeli side although Shimon Abuhazira scored in the 76th minute to give the visitors a consolation goal. After three games, Sparta are ranked second in their group with 6 points, trailing Lyon by three points.

Sparta have a good chance of advancing from the group but captain Marek Matějovský says they need to keep things ‘down to earth’.

“We’re off to a good start in our group but there are three more matches to be played and anything can happen. We have to be humble in the coming games, just like we have been, but I think our coach is good at that. We will do our best to advance from the group which I would consider a great success.”

For their part, Viktoria Plzeň beat Hapoel Tel Aviv 2:1 in Israel on Thursday, in Europa League’s Group B. Plzeň were one down thanks to Hanan Maman’s opener but came back when captain Pavel Horváth equalized in the first half extra time. 10 minutes into the second half, the visiting side’s František Rajtoral scored the winning goal. Plzeň, too, look to advance from their group as they are on second place with six points, three points behind leaders Atlético Madrid. 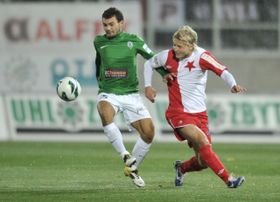 Jablonec - Slavia Prague, photo: CTK Meanwhile, three teams are tied at the top of the Czech top division. Jablonec, in first place, drew 0:0 against Slavia in the Gambrinus liga’s latest round, while Sparta beat reigning champions Liberec 2:1 and moved up to second place on goal difference. Sigma Olomouc failed to move to the top when they tied with Teplice 1:1 on Sunday, and are third. Viktoria Plzeň. in fourth place, trail the leading trio by four points. 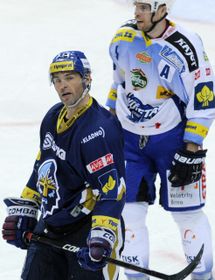 Jaromír Jágr, photo: CTK Moving on to hockey now where Kladno with Jaromír Jágr in their ranks set an all-time attendance record for the top hockey league. Tuesday’s game between Kladno and Kometa Brno, another team with a strong fan base, drew 17,182 spectators into Prague’s O2 arena, the biggest crowd in history. However, Jágr’s magic failed to work on the ice as Kometa won 4:2. Jaromír Jágr took the defeat philosophically.

“You have to experience such games as well to move ahead in one way or another. It’s always easier to enjoy a game in which you are leading instead of having to suffer through the match, making sure you don’t lose by a higher margin. But Kometa played better today and deserved to win.”

But on Friday, Jágr was back in full form and his team beat Vítkovice 4:1 while on Sunday, Kladno earned another win against Sparta Prague. The league table is topped by Plzeň, followed by Kometa Brno and Kladno. 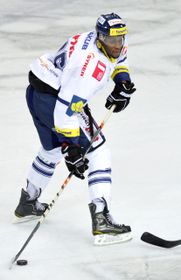 Wayne Simmonds, photo: CTK In other extraliga news, the Chomutov Pirates have distanced themselves from racist abuse of Canadian player Wayne Simmonds which occurred during Sunday’s game against Liberec. Some Chomutov fans targeted the right wing, who is of black descent, by making monkey noises at him and calling him names. The club also issued an apology to the Canadian, who plays for the Philadelphia Flyers in the NHL and joined Liberec for the duration of the lockout.

In tennis, the Czech pair of Andrea Hlaváčková and Lucie Hradecká reached the doubles final at the WTA Championships in Istanbul but stopped short of winning the season-ending event when they lost to Russia’s Maria Kirilenko and Nadia Petrova 6-1, 6-4. The Istanbul final was the fifth this season in which the Czech team suffered defeat. Meanwhile, defending champion Petra Kvitová quit the tournament for health reasons, hoping she would be fit for the upcoming Fed Cup finals against Serbia.