In Sports News this Monday: Slavia beat out-of-form Sparta in the 278th Prague derby; ex-Czech defender Martin Jiránek scores one of Europe’s goals of the season so far, in the Russian league; Jaromír Jágr leads Kladno to their fifth Extraliga win in a row - and draws the crowds; and Tomáš Berdych advances to the second round in Tokyo.

Martin Latka, photo: CTK The biggest game in the Czech football’s top flight at the weekend was Saturday night’s hotly anticipated derby between Slavia and Sparta, in what was the 278th meeting between the traditional Prague rivals. The game took place at Slavia’s Eden stadium, although the hosts had failed to make home advantage pay in recent years. Indeed, they had failed to beat Sparta home or away in seven encounters. However, those few years of pain were washed away on Saturday, thanks to a 73rd minute headed goal from captain Martin Latka that gave Slavia a deserved 1:0 win. After the game, the modest defender was keen to share the glory with team-mate David Hubáček, who had sent a perfectly weighted free kick into Sparta’s box.

“I'd say there was a bit of luck involved. Before the game Hubáček and I had agreed on a signal, and it worked beautifully. They probably expected a cross that they could deal with. But Hubáček delivered a fantastic ball to me – I hadn’t expected such a nice ball.”

That result leaves Slavia in fifth place, two points behind Sparta. Sparta have now lost in four straight outings – one defeat short of equalling their all-time worst record. Meanwhile, Viktoria Plzeň continue to top the table, after drawing 1:1 at home with Slovácko on Sunday. However, Plzeň could be replaced in first place by Jablonec, if they beat Dukla Prague on Monday evening, after the recording of our programme. 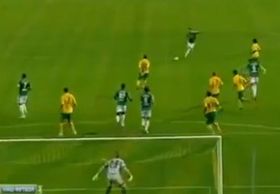 Photo: YouTube Away from the domestic league, former Czech international defender Martin Jiránek scored an absolutely stunning goal for Terek Grozny against Kuban Krasnodar in the Russian Premier League at the weekend. From just past the centre circle Jiránek – apart from the goalkeeper, Terek’s last man at their end of the pitch – let fly with a powerful shot that swerved slightly as it hit the top right-hand corner of the net. It’s already a contender for European goal of the season and is definitely worth searching out on the internet. 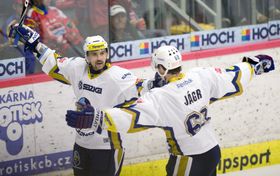 Tomáš Plekanec, Jaromír Jágr, photo: CTK The Czech ice hockey Extraliga seems to have been turned on its head. Sparta, Pardubice and Liberec all figured in the top four in the regular season last time out, but they are currently occupying the bottom three slots in the table, in that order. One reason for this could well be the NHL lockout, which has led to many stars appearing for Czech teams and upsetting the form book. The most famous of those stars is without doubt Jaromír Jágr, considered the greatest Czech forward of all time. Jágr has now led his hometown club Kladno to five wins in a row and added to his points tally with two goals in their latest victory, 6:2 at České Budějovice on Sunday. The 42-year-old has also been attracting huge crowds, with the average gate for his Extraliga matches so far at over 10,000, while Kladno have climbed to third. Fans of the club – and perhaps neutrals – will no doubt be keeping their fingers crossed that the NHL lockout lasts all season.

Berdych advances in Tokyo but Kvitová knocked out in Beijing 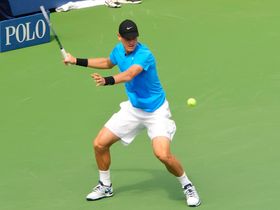 Tomáš Berdych, photo: Francisco Diez, CC 2.0 license Tomáš Berdych advanced on Monday to the second round of the Pan Pacific Open in Tokyo, a competition he won in 2008. The Czech men’s tennis number one beat Benoit Paire of France 6-1 7-6. Meanwhile, the leading Czech women’s player, Petra Kvitová, failed to advance to round three of the China Open in Beijing, after losing 3-6 2-6 to Spain’s Carla Suarez.