In Sports News: the Czech national football team arrives in Poland ahead of Euro 2012; in hockey, the L.A. Kings have won the first two games of Stanley Cup finals against the New Jersey Devils, lessening the chance the cup will travel to the Czech Republic this year; in tennis, world No. 4 Petra Kvitová and fellow Czech player Klára Zakopalová have both made it to the fourth round at the French Open. 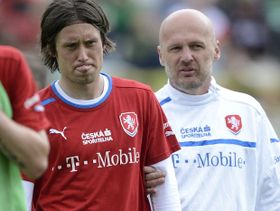 Tomáš Rosický, head coach Michal Bílek, photo: CTK The Czech national football team has travelled to Poland where it will begin final preparations for Euro 2012 which kicks off this week. The team will begin its tournament on Friday against Russia. Good news for the squad, and Czech fans, is that team captain Tomáš Rosický trained in cool weather on Monday morning for the first time since suffering injury; the midfielder, had been out for three weeks. The news website idnes reported that he suffered no difficulties on the pitch, practicing with team mate Daniel Kolář. Here’s what team doctor Petr Krejčí had to say:

“He’s beginning to train and things look pretty good. We expect that he will be ready for Russia. We’ll see how the training goes but I think there is a 95 percent chance things will go well.”

As far as the national squad goes, the Czechs will hope they can rebound from a loss last Friday, when the squad – minus Rosický - lost to Hungary at Letná stadium in Prague. Hungary opened the scoring after just six minutes on a quick free kick by Balazs Dzsudzsak that caught Čech and the defenders off guard. The hosts, who created a number of chances, equalized with a Michal Kadlec penalty midway through the first half. But Hungary struck again late in the game when Adam Gyurcso scored. 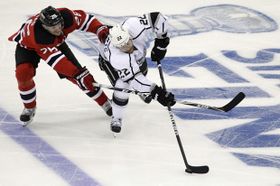 New Jersey Devils' Patrik Eliáš, Los Angeles Kings' Trevor Lewis, photo: CTK In hockey, Stanley Cup finalists the L.A. Kings won the first two games in their matchup against the New Jersey Devils, lessening the chance the cup will travel to the Czech Republic this year; the Kings, unlike their opponents, have no Czechs on the roster. In Game 1, New Jersey’s Patrik Eliáš earned one assist; as did Marek Židlický in Game 2. In Game 2, Eliáš had opportunities - at one point moving up with a four-man rush – but was unable to score. The Kings won both games in overtime with a score of 2:1. The third game takes place at L.A.’s Staples Centre; the Kings are the first team in history to go 10-0 on the road in the Stanley Cup Playoffs.

Tennis: Kvitová, Zakopalová through to fourth round at Roland Garros 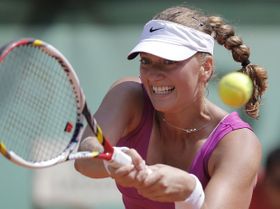 Petra Kvitová, photo: CTK In tennis, world No. 4 Petra Kvitová and fellow Czech player Klára Zakopalová have both made it to the fourth round at the French Open. Zakopalová advanced in straight sets over Anastasia Pavlyuchenkova (6:3, 7:5). Kvitová lost her first set at Roland Garros but survived for a 6-2 4-6 6-1 victory over Nina Bratchikova.

In the men’s singles, Czech tennis player Tomáš Berdych survived a tough five-setter on Friday against South Africa’s Kurt Anderson at Roland-Garros, but faces another uphill battle in a round four match that was suspended until Monday, after the taping of this programme. Berdych is down two sets to one against Del Potro and will have to win in five – again – if he wants to reach the quarterfinals.