Čech one of the heroes in Champions League triumph

Petr Čech, photo: CTK Star goalie Petr Čech became just the fourth Czech in football history to hoist the Champions League Cup after Chelsea defeated Bayern Munich at their home stadium in Germany On Saturday. Čech was also one of the main heroes of the match, the last line of a formidable defence that stopped onslaught after onslaught by the superior Bayern offence. The goalkeeper was beaten only once in regular time, when Mueller finally broke the deadlock in what looked to be the winner in the 82nd minute. But Chelsea’s talismanic Didier Drogba put Chelsea level again two minutes from time. In extra time, Čech continued to shine, with a turning point coming after he stopped a penalty kick by striker Arjen Robben.

When the game came down to extremely dramatic penalties after extra time, Chelsea trailed at one point 3-1, but Čech then stopped Ivica Olic and 'forced' Bastian Shweinsteiger’s shot which hit the post. Drogba then scored the winner, securing the famous trophy for Chelsea. After the game, here’s what goalkeeper Petr Čech said:

“After I saved Robben’s penalty I began to believe we would successfully see things through. In this game I faced a total of six penalty shots and each time I guessed the direction correctly and went the right way. That gave me the added confidence that I would be able to stop at least one of them.”

A day after the win Petr Čech turned 30, making clear he couldn’t imagine a better birthday present. Erased at last is the disappointment of losing in the Champions league final in Moscow (also on penalties) against Manchester United four years ago. As the press noted the Chelsea triumph is a major one for Chelsea’s ‘old guard’ that includes longtime players like Didier Drogba, Frank Lampard and John Terry.

Rosický to be ready for European Championship Tomáš Rosický, photo: CTK Continuing with football, there was a slight scare that the Czech national squad captain, midfielder Tomáš Rosický might be in a spot of injury trouble ahead of the European Championship which begins mid-June. Rosický suffered a slight groin injury but the prognosis is that he should be fully ready.

“I was really exhausted from the regular season. It was very long and I played all the time. I even had problems with my heel so I didn’t train for two weeks before, so I was wiped out from the matches themselves and didn’t have time to recover in training.” 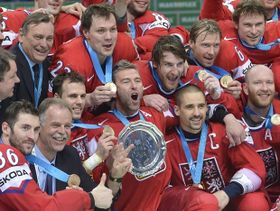 Photo: CTK On Sunday the Czech national hockey team rebounded just a day after losing the semifinal at the world championships in ice hockey to Slovakia. In its final game of the tournament the team beat Finland 3:2 to take the bronze medal for the second year in a row. In 2010, the team won gold in Germany. The result was particularly satisfying for teammates like 40-year-old veteran Petr Nedvěd, who is not likely to return to the roster next year.

Meanwhile, here’s how the result was rated by team coach Alois Hadamczik:

“I am glad that after the big disappointment of the semifinal they were able to get some rest and that they came back in a fighting mood. They showed that they wanted to win, that they wanted the medal both for themselves and for the nation and they played a really good game.”

In the bronze medal game the Czech team scored all three of its goals in the first period and then had to weather an onslaught that brought Finland within one. In the third, for example, the Finns outshot the Czechs 14-1 but goalie Jakub Štepánek held on.