Petra Kvitová, photo: CTK Petra Kvitová advanced the Czech women’s team into the semi-final of the Fed Cup but it wasn’t easy for the world no. 2. On Saturday the player faced Germany’s Julia Goerges in the quarterfinal in the Stuttgart and was pushed to the very limit, losing the first set 3-6. Kvitová came back to win the second set 6-3, but the final one went down the wire: in the tiebreak the player edged by a score of 10-8. After the match here’s what Kvitová had to say:

“There was really very little difference between us. I had a lot of chances and I had a break but then unfortunately it was her break again. I had some chances but it wasn’t easy to continue the game. There are a lot of people who supported us, who support you all the time, they’re here and you know that you can’t give up.”

A day later she had to dig deep again in still another three-set match-up this time against Sabine Lisicki. Kvitová was able to recover after again losing the first set, this time in a tiebreak but took the next two. The final score was 6:7, 6:4, 6:1. Kvitová now has a 27 match winning streak indoors and the Fed Cup defending champions won by an overall score in Germany of 4:1. The team will face Italy next in the semi-finals on April 21-22.

A preliminary match in Spain between Czech top flight football club Sparta Prague and Switzerland’s Bellinzona ended after just half-an-hour at the weekend after an incident between Cameroonian national Leonard Kweuke (who plays for Sparta) and Czech player Pavel Pergl, who used to play for the same squad. The match saw a tussle between the two players with Kweuke accusing Pergl of having made racist remarks. Luckily, it didn’t come to blows as both were split up by players and staff from both teams, Mladá fronta Dnes reported.

Pergl admitted he cursed the other player but said there was no racist context. That, however, was denied by Sparta’s general manager, Jaroslav Hřebík as well as team captain Marek Matějovský who were reportedly closest to the incident. The match and a follow-up in the afternoon were both called off, with the Swiss club accusing Sparta of unsportsmanlike play, on its website saying one of their players had been fouled 13 times during the truncated game. 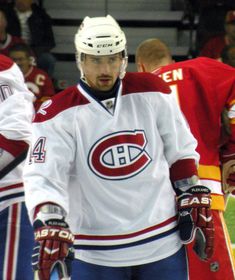 Tomáš Plekanec, photo: Resolute / Creative Commons 3.0 Unported In the National Hockey league, Czech centre-forward Tomáš Plekanec earned one assist and scored the final goal for the Montreal Canadiens against fellow Canadian club the Winnipeg Jets. Plekanec, who has 36 points in 53 games this season (11 goals, 25 assists) beat goalie Ondřej Pavelec from the point. For a moment it appeared that Scott Gomez, who has not scored since last season and has had a major dry streak, had gotten a stick on it. But the video replay showed the goal was Plekanec’s. The Canadiens won 3:0.

In the Czech hockey league Moravian club Kometa Brno has a chance – for the first time since re-entering the top flight – of reaching the playoffs through a round-robin. The club demolished Vítkovice by a score of 8:2 and is currently in 10th place – 7 points better than Karlovy Vary. Five rounds remain in the regular season, meaning in all likelihood Slavia – in last place in the league – no longer has a real shot. Slavia lost to Kladno 3:2 in their last game.