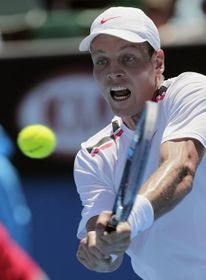 Tomáš Berdych, photo: CTK Starting off with tennis, and the Australian Open in Melbourne, where three Czech players – among them favourite Tomáš Berdych, advanced to the second round on Monday. World no. 7 Berdych had the wind and heat to compete against as he faced Albert Ramos. The Spaniard put up tough opposition but the second half of the match clearly belonged to Berdych, who came out the victor after nearly three hours. He will now meet Belgian Olivier Rochus in the second round. Meanwhile, in her third appearance at the Australian Open Petra Cetkovská finally fought through the first round, defeating Ayumi Morita 3:6, 6:1, 7:5. Iveta Benešová then looked to be down against Mathilde Johansson but turned things around in the last set. She now will meet 16th seed Shuai Peng of china on Wednesday. Worse news for Czech no. 2 Lucie Šafářová, who had more trouble with the wind and lost to American Christina McHaleová after two sets. 2:6, 4:6. Lastly Eva Birnerová left the tourney after a loss to Spain’s Anabel Medina 3:6 3:6. 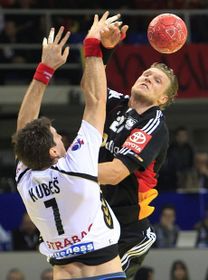 Photo: CTK In handball and the European championships in the Serbian city of Niš, the Czech team made an impressive opening-game showing with a win over Germany. The Germans made a strong push against the Czech’s 14:9 halftime lead but only managed to get one goal behind the Czech team which eventually gained a five-goal lead. The German side came close again in the final part of the match but the Czechs held out. The victory was all the sweeter for the fact that most of the Czech professional team plays in the German top handball league, including the current World Handball Player Filip Jícha, who scored seven goals the game, and Daniel Kubeš, who had this to say about the match when talking to Czech Television:

“I think Czech Television viewers saw that we simply wanted to win a lot more than the Germans did. Even though there were moments when we weren’t playing as well and it was just standard-level handball, at the end of the day we just wanted it more than they did, and we put them under so much pressure that they couldn’t hold out.” 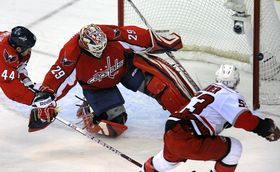 Tomáš Vokoun, photo: CTK In the NHL, Czech goaltender Tomáš Vokoun shined in a match against the Carolina Hurricanes on Sunday, stopping thirty shots on goal and allowing the Washington Capitals a 2:1 victory. That won him star of the match status for the second time in the last three matches, all of which were wins for the Capitals. Sunday’s victory secured a return to the first place slot for Washington in the southeast division with fifty points in the middle of the season.

Two-time world cyclo-cross champion Zdeněk Štybar has taken the Patrick UCI Cyclo-cross Cup in Liévin, France. A stumble on the part of runner up Kevin Pauwels in the last leg sealed victory for Štybar, who afterwards said the Belgian had been in top form. Indeed, Štybar finished with a 16-second lead in his first cup victory of the year; thirty seconds behind him was countryman Radomír Šimůnek in third place. Despite the win, Štybar falls short of an overall win in this season’s World Cup, with Pauwels topping the overall World Cup rankings in the Elite Men’s category with one round left to race.