In Sports News: The Czech Republic’s football squad downs Montenegro to boost its chances of reaching Euro 2012; Plzeň, currently in fourth spot in the Gambrinus Liga down 2nd league Sokolov in the 3rd round of the Czech Cup; Federer defeats Berdych in Paris; Russia has defeated the Czech Republic’s hockey team to win Karjala Cup. 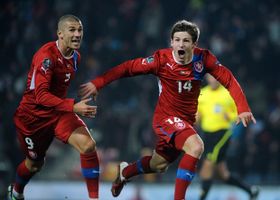 Jan Rezek, Václav Pilař, photo: CTK The Czech Republic will try to secure a fifth consecutive spot in the European football champions on Tuesday with a draw or win against Montenegro in Podgorica. On Friday, the Czech team, playing its best match to date under oft-criticised head coach Michal Bilek, turned out a brilliant performance in the first leg, defeating its Balkan rivals 2:0. Goals in the second half from Václav Pilař and Tomáš Sivok. Team captain and key playmaker Tomáš Rosický, was also a major factor in the win. After the match here’s what he had to say:

“The way to win is pretty clear: to limit your opponent’s chances. We kept those at a minimum and that’s was key... I’ve been in two playoffs before and that’s the way to do it, obviously.” Petr Čech, photo: CTK The game was also positive for goalie Petr Čech who played comfortably in a protective carbon fibre facemask after having broken his nose the weekend before: he saved a key opportunity and keeping a clean-sheet to no doubt frustrate the opponents. All that leaves the Czechs in good shape ahead of Tuesday’s match, leaving Montenegro’s coach Branko Brnovic with little more than to say than that he still feels his squad has a chance. In front of a frenetic home crowd he made clear he believes his squad can beat the Czechs 3:0 to advance on aggregate, something Tomáš Rosický was asked about:

“For sure they have what it take to score. On the other hand, I am not going to comment on what our opponent says. I am not in the least bit interested: we are going to focus on what we need to do. If they are betting on the atmosphere at home, sure, things are going to ‘heat up’ but we’re experienced enough to handle it.”

The match on Tuesday kicks-off in Podgorica at 20:15 local time.

Plzeň down Sokolov in Ondrášovka Cup

Plzeň, currently in fourth spot in the Gambrinus Liga, downed 2nd league Sokolov in the 3rd round of the Ondrášovka (or Czech) Cup despite missing four key players in Montenegro with the national team. The team won by a score of 3:1, with Ďuriš scoring the opener in the 18th minute on a pass from Horváth and Hora later scoring two. The lower league Sokolov were able to get on back in the 74th minute but never proved a serious threat. 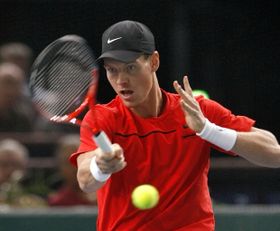 Tomáš Berdych, photo: CTK Czech tennis player Tomáš Berdych, the World No. 7 was outclassed on Saturday at the Paribas Masters in Paris, an ATP World Tour Masters 1000 event. The player lost 6:4, 6:3 to Swiss player Roger Federer in just 80 minutes. The Czech has now faced the former World No. 1 in 14 career matchups, winning four and losing ten against the Swiss player. 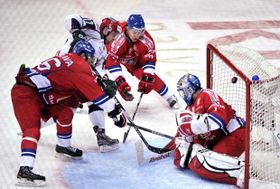 Czech Republic - Russia, photo: CTK Russia won the four-nation Karjala Cup on Sunday after Alexei Morozov scored in overtime to clinch a 4-3 victory over the Czech Republic. The Czechs led 2-0 with early goals from Jan Bulis and Pavel Brendl, but Russia equalized through Oleg Saprykin and Sergei Mozyakin in the second period. Danis Zaripov gave Russia a 3-2 lead in the third, before Jaroslav Bednar equalized with less than five minutes left.